Nearly nude professional model—and  vegetarian—Megan Currie sudsed up in a tub in Edinburgh, Scotland, for World Water Week while policymakers met in Sweden to discuss global water issues. The bathing PETA UK beauty informed passersby that it takes the equivalent of 50 bathtubs filled with water to produce just one steak.

“Not only does the meat industry inflict cruelty, it also wastes huge amounts of water and damages the planet,” says Megan. “You can’t eat meat and be an environmentalist.” 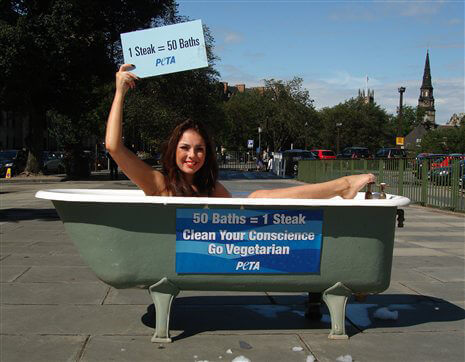 A recent U.N. report calls the livestock industry “a key player in increasing water use” and “probably the largest sectoral source of water pollution.”

On top of that, billions of animals raised for food each year endure routine abuse on crowded, filthy factory farms, where they are subjected to painful mutilations, before being sent to slaughter, where many are butchered while still conscious.

You can help fight the worldwide water crisis and save up to 100 animals per year by going vegan today.