Ugh. It’s that time of year again. With the mercury dipping and the holidays just around the corner, flurries of cold-hearted fur hags are starting to be seen on the social scene (that famous footage of Bigfoot was actually an opera buffa walking off the effects of her Pomtini). It’s also the time of year when people who care about animals must shift into high gear and take fur hags to task for parading about in pelts.

Here’s how you can help. No matter who you are, no matter how shy or inhibited you are, always say something, anything to people who wear fur. The fact is that there are Cruellas in this world who simply don’t have empathy for animals. They only care about themselves, and the only way to get them to stop wearing fur is to shame them. So, figure out what type of fur foe you are and proceed from there:

A. The Bashful Fur Basher. Love animals but hate conflict? After you politely ask if they’re wearing the real deal, lay on the guilt trip by saying something like, “That’s a shame that so many animals had to be killed for your coat,” and hand them a fur card or leaflet. If you’re really, really painfully shy, take a move from the passive-aggressive playbook and start up a conversation within hearing distance about the gruesome fur industry. Even a pretend conversation on your cell phone!

B. The Fierce Fur Foe. Have a hard time hiding your disgust when you see people draped in animal hides? Don’t fight it, use it. First, initiate a conversation about fur by asking them if they’re wearing a genuine dead animal or a fabulous faux. Or take my favorite approach and make a date with a friend to leaflet where fur wearers may be hanging out (fur salons, shopping malls, symphonies, ballets, operas, and other theatrical events) just to remind them how coldhearted they really are. E-mail [email protected] to get involved with leafleting events in your hometown.

C. The “Hell Hath No Fury” Fur Foe. Do you see red when you spy someone wearing fur? Go with it. Heck, don’t even bother asking if it’s real—what are they doing supporting a look that kills anyway?! Open up that can of “whoop-ass” you’ve been saving for a special occasion and take out your pent-up aggression on someone who deserves it. We’re not recommending the “LiLo flour power” type of action here, but saying something like, “How did you get the blood out of your coat?” or even yelling, “Fur Shame!” won’t hurt. 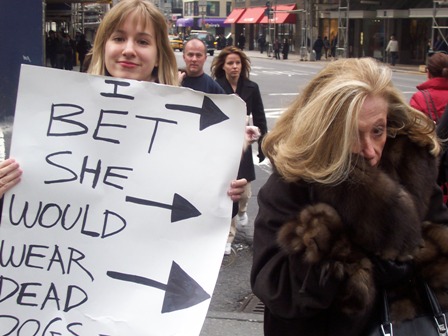 Need more encouragement? Remember: bros before fur hos. Think about the hungry foxes in a den crying for a mother who will never come home; the snow-covered minks shivering in cramped, exposed wire cages on fur farms; and the rabbits howling like human babies as their skin is ripped from their bodies. Being heartbroken is not enough, so get out there today and let fur-wearers know that they are supporting one of the most violent, bloody industries on the planet. And for the love of all that is furry—please make sure that your sign is facing the right way! 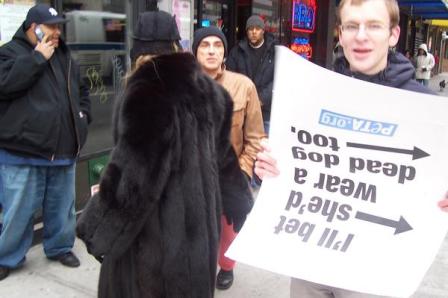