Jonathan Babineaux, defensive tackle for the Atlanta Falcons, is facing felony charges in Gwinnett County Court, stemming from his alleged February 18 fatal attack on a dog. Evidently, after arguing with his girlfriend, the 286 pound lineman inflicted blunt force trauma on her dog, Kilo. According to news sources, Kilo vomited blood en route to an emergency vet clinic, and was pronounced dead there.

We’re calling on the Falcons to suspend Babineaux without pay until the courts can do their thing, and if he is found guilty we have asked the Falcons to release him from the team. But as if this case isn’t disturbing enough, there have been repeated instances of animal abuse by NFL players in the past. In December, six pit bulls belonging to the Chicago Bears’ Tank Johnson were said to have been the subject of public and official concern in Illinois. Leshon Johnson, who played running back for three NFL teams, faced felony charges with 21 others in 2004 stemming from their alleged involvement in a massive dogfighting ring. Former Eagles’ safety Damon Moore was accused in 2001 of abandoning his puppy in a soccer field in New Jersey, and former Eagles’ running back Thomas Hamner was twice convicted of beating his dog. 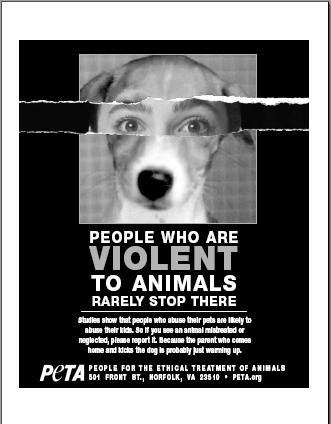 Given the seeming pattern of abuse here, we’ve also written to Roger Goodell, Commissioner of the NFL, asking him to implement a strict, clear no-tolerance policy on players’ abuse of animals. Surely this issue deserves as much attention from the league as any other illegal or violent player activity, which he swore to crack down on in a recent press conference.

At least there are some NFL players who get it. Check out Giants lineman Michael Strahan’s ad here.