Update: Apple Jack has been adopted! A PETA staffer and her partner fell under this little charmer’s spell, and soon, he was off to sunny Florida to meet his new family. The couple was smitten with him as soon as they met him, and he and their older dog, Luna, immediately exchanged kisses. With a new name to fit his new life, Capone is finally getting to be a dog. He spends his days running through the yard trading tackles with his canine big sister, going for evening walks with his family, and learning how to play ball and Frisbee. He’s made his first visits to a dog park, a dog beach, and a canine-friendly restaurant, and he’s taken a stroll through his new town. The pup makes friends everywhere he goes. His new guardian says, “My favorite thing is that when we’re settling in for the night, Capone hops into my lap, lays his head on my chest, and falls asleep. He is so affectionate and just has the biggest heart. He’s going to live his best life from here on out.” 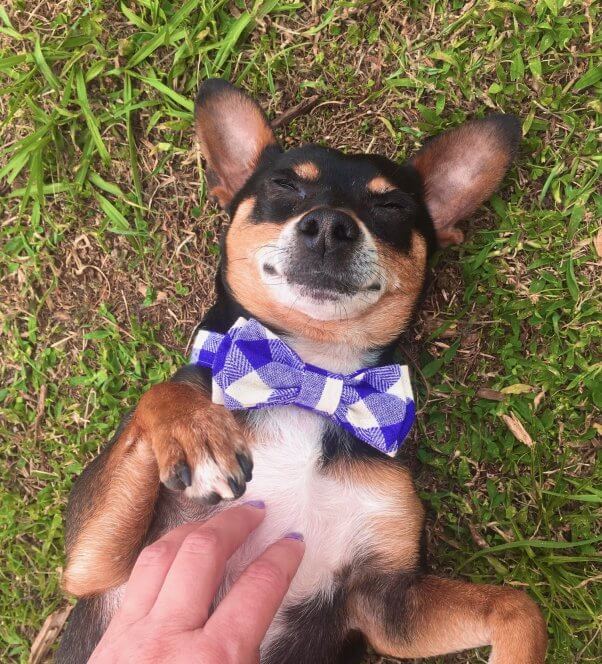 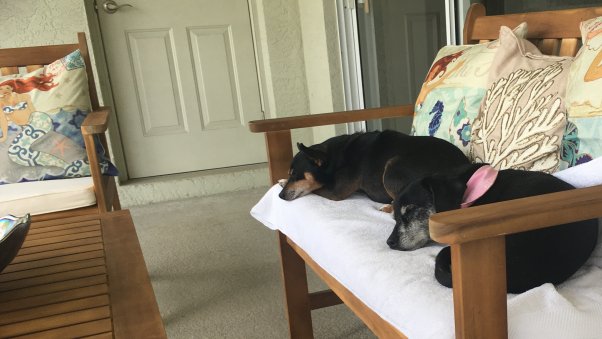 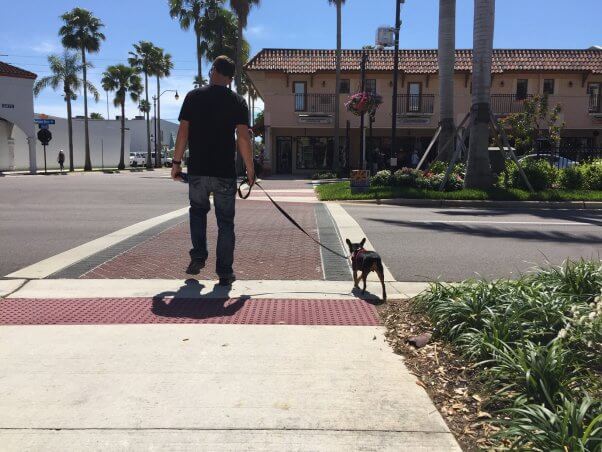 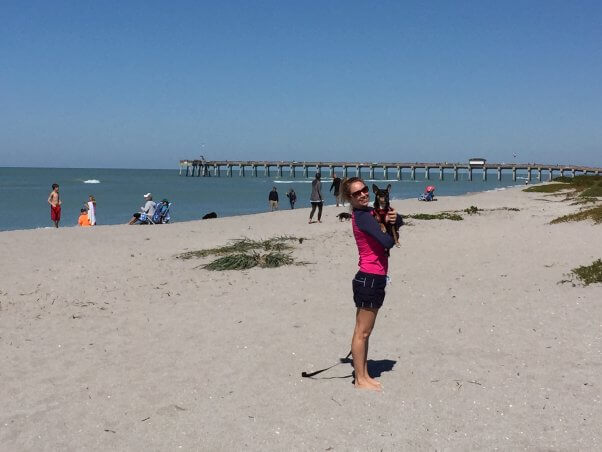 When PETA fieldworkers first met Apple Jack (aka “A.J.”), this is how they found him: 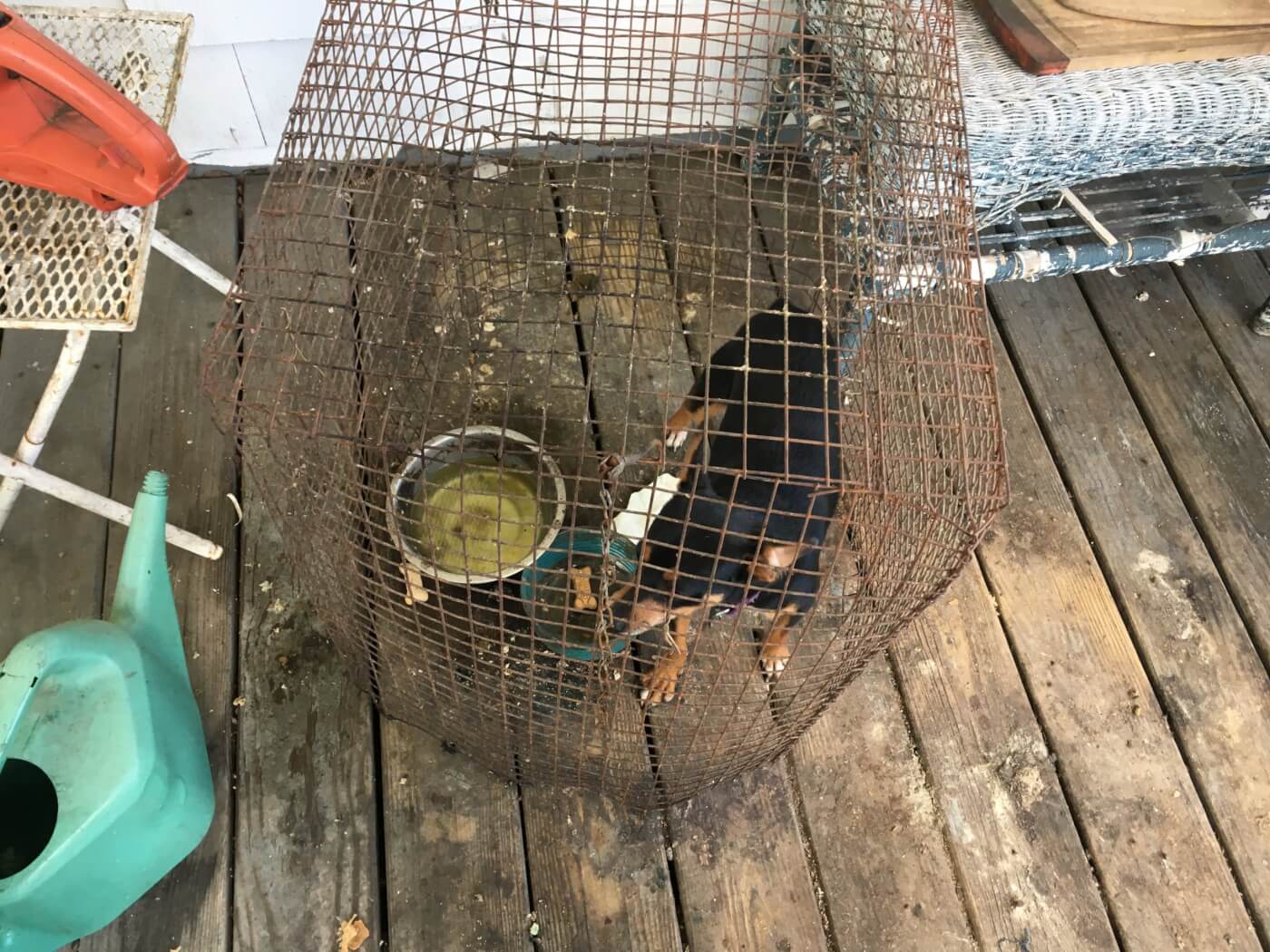 They begged his elderly owner to let the little dog out of the jury-rigged wire cage, but the man insisted, against all logic, that a visibly depressed A.J. “liked it in there.” 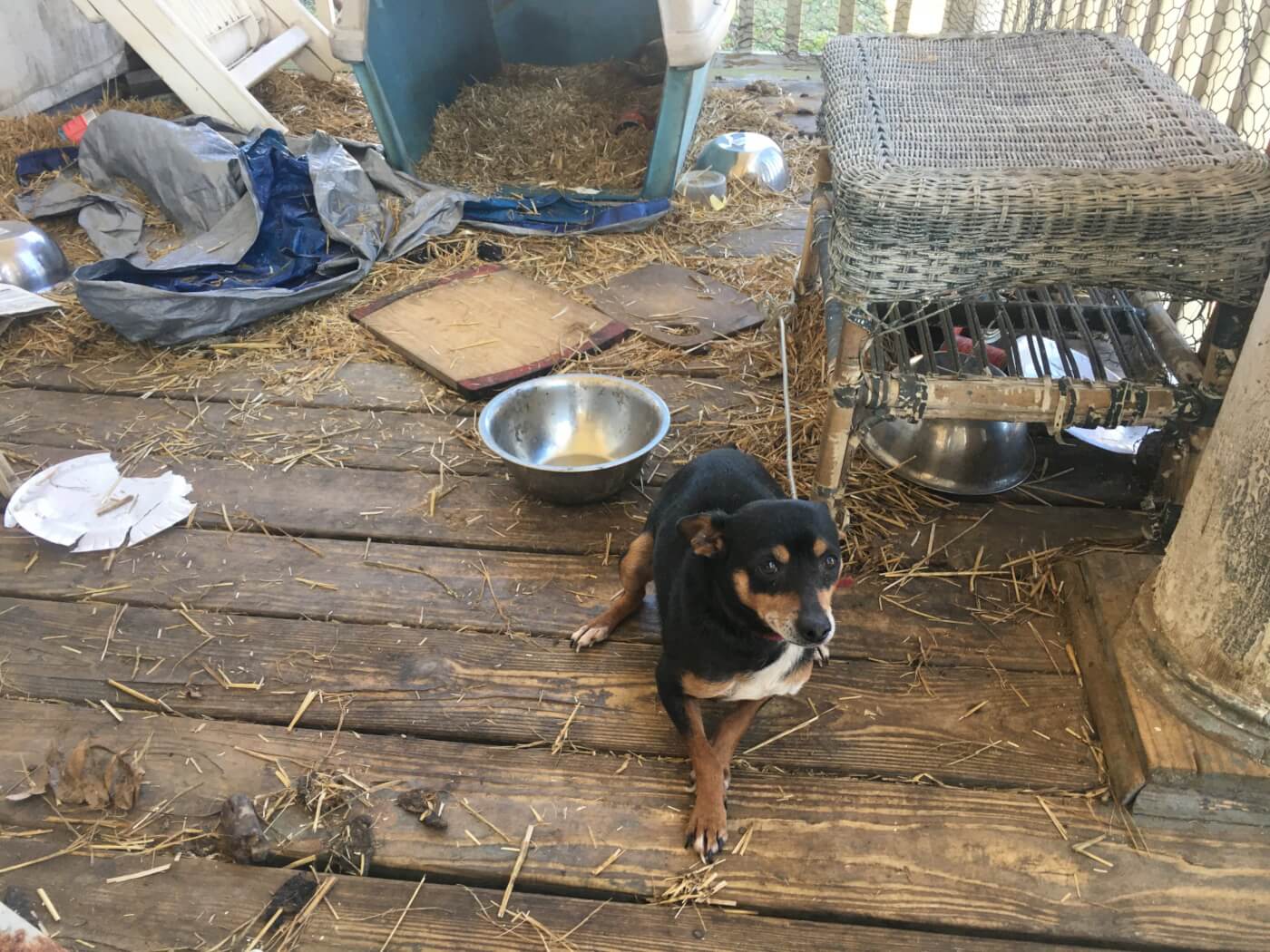 In reality, no one—including dogs and lobsters—“likes” being trapped inside a rusty cage. But even when he wasn’t in the cage, life wasn’t much better for A.J.—he was tethered to a deck surrounded by his own waste, with only filthy water to drink and a flimsy plastic carrier covered with a tarp to offer a modicum of “protection” from the rain, snow, and freezing cold. (The cans of dog food and the straw bedding seen in the photo below are courtesy of PETA fieldworkers, who worked for years to improve A.J.’s living conditions.) 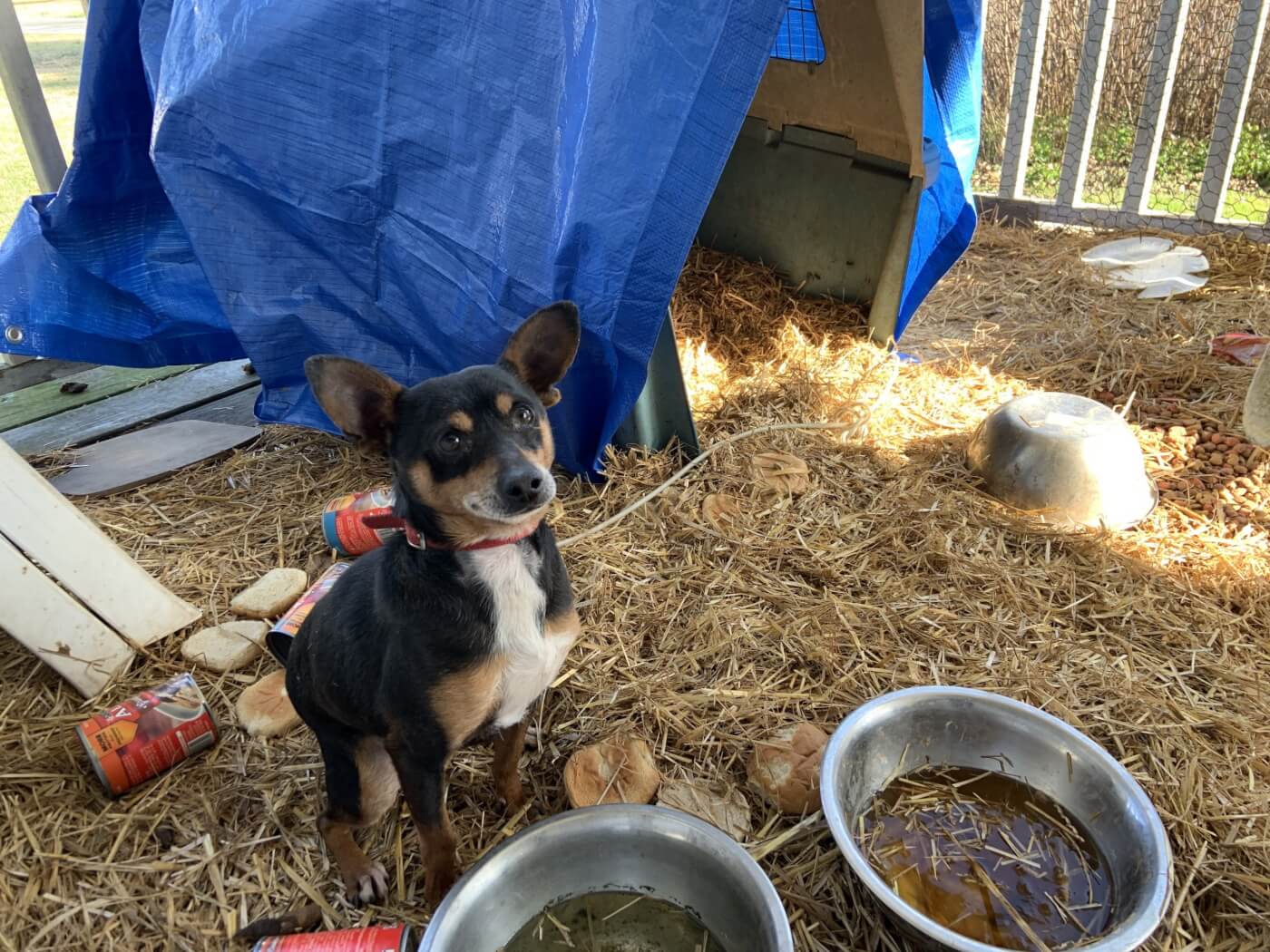 Last week, we received word that A.J.’s owner was terminally ill and had gone into hospice care. His family asked PETA to find a good home for the affectionate miniature pinscher mix, and we were thrilled to have the chance at last to give this little guy the life in the lap of luxury that he deserves.

Apple Jack is so excited after saying goodbye to that rusty cage that he feels like doing jumping jacks. 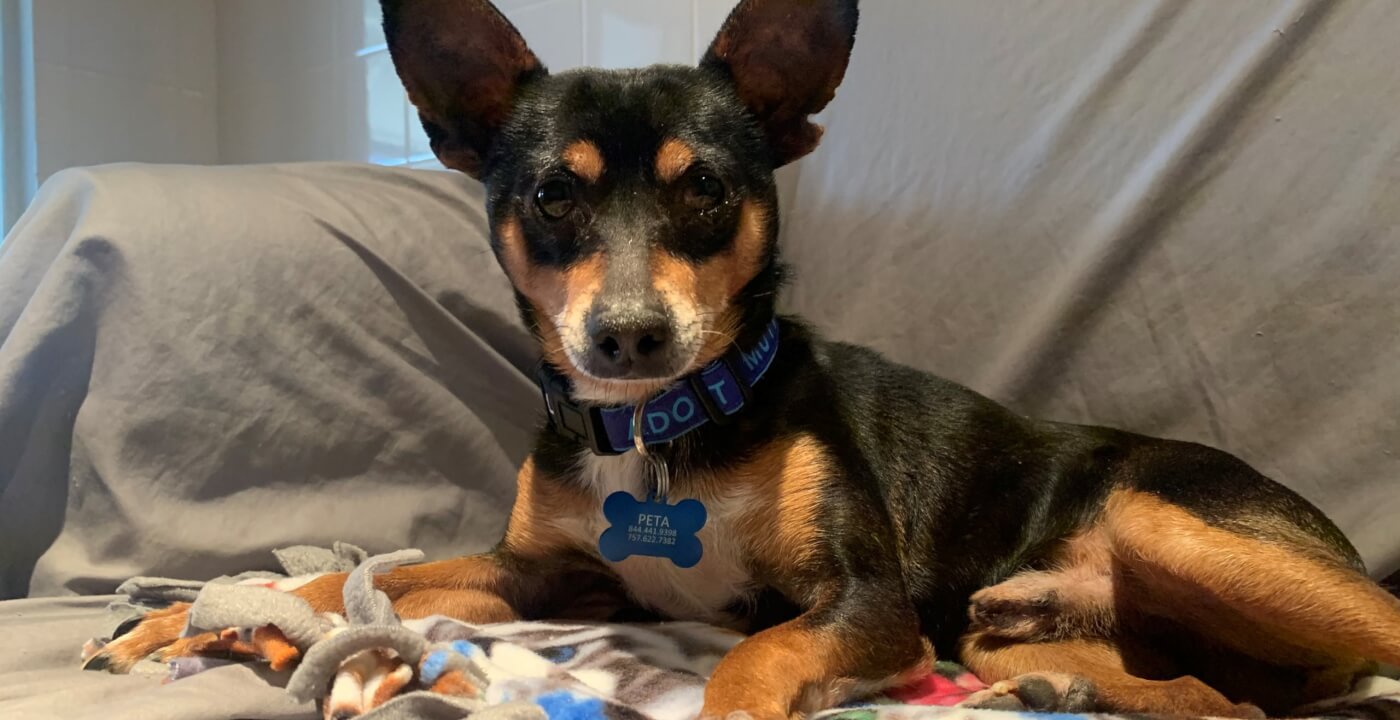 Are you ready to make A.J. the apple of your eye? We (and he) would love to hear from you! He’s smart as a whip and a fast learner. He’s getting the knack of housetraining like a champ, and he’s already learned that laps are the very best place to sit. However, since reading is still beyond his many capabilities, please direct inquiries about adopting this little apple blossom to his “fan club” at [email protected]. 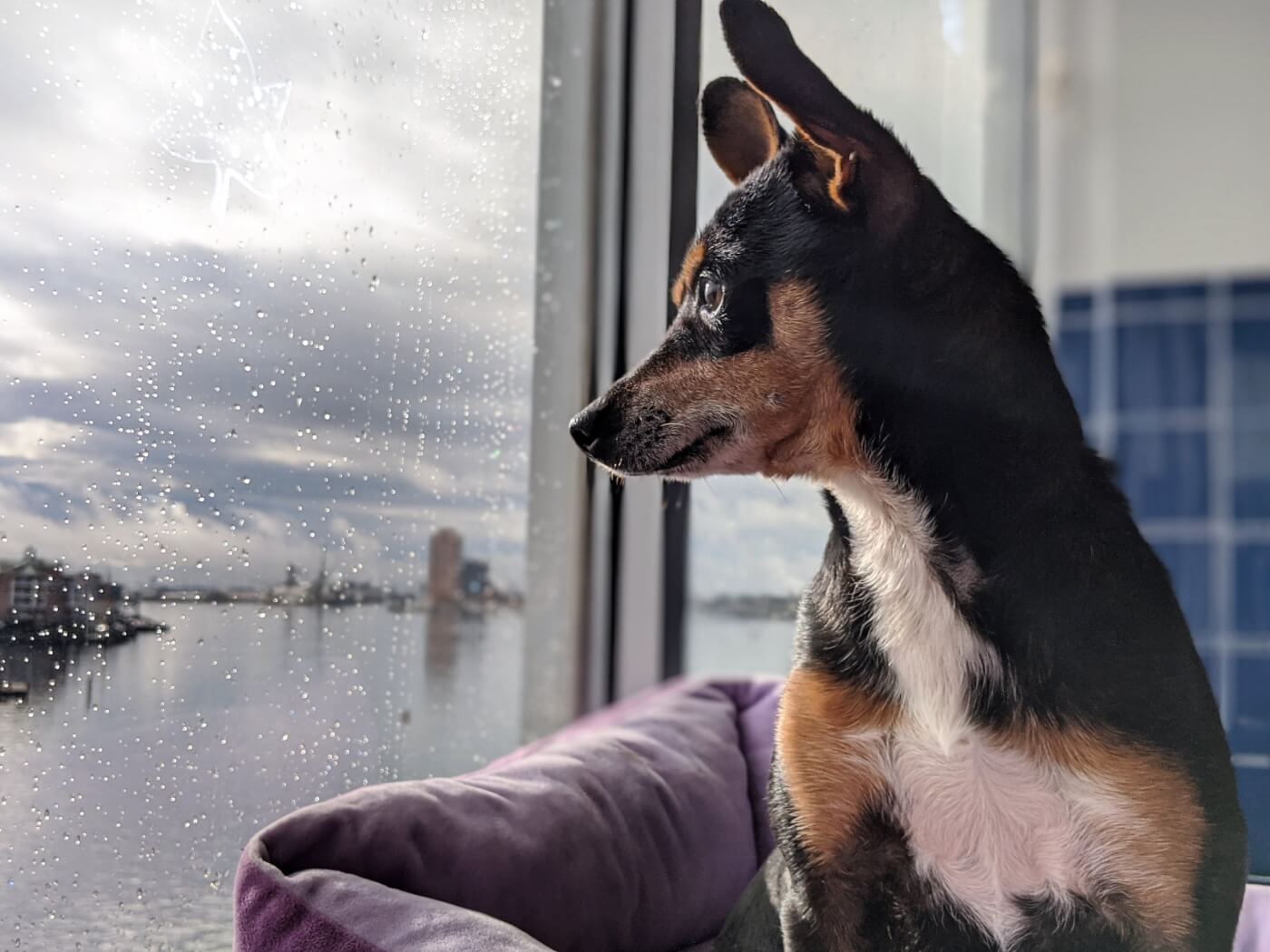 Learn More About Apple Jack And Other Adoptable Animals