I wonder who in today’s day and age thought that bullock carts were still a good idea.

After teaming up with Bollywood celebrities to protest this inhumane use of bullocks, PETA India has now turned to a creative street-demo approach! In Mumbai—a traffic-congested, bustling rich city—the local kerosene companies (which are not poor by any stretch of the imagination) use bullocks to pull rickety carts heavily laden with kerosene barrels. Between shipments, the bullocks are also forced to stand for hours without any shade in the sweltering sun and are not given sufficient food or anywhere near the amount of water they need. PETA India has discovered that sick and injured bullocks are being forced to pull the extremely heavy oil carts through the city and that they do not receive any veterinary care.

Join PETA India—and the Bollywood humane set—and sign the petition asking Mumbai’s controller of rationing to end this cruelty to bullocks. Also, check out these great photos from the PETA India demo 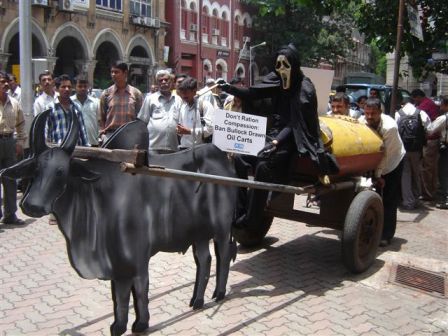 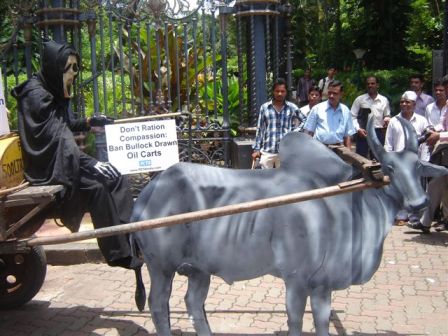