PETA has learned that Casey, a young, paralyzed St. Bernard, died recently at Angel’s Gate, reportedly after suffering from a long-term urinary tract infection. Casey spent most of her short life at the mercy of Susan Marino—the founder and operator of the hellhole, which continues to keep hundreds of ailing and disabled animals in conditions that you wouldn’t wish on your worst enemy. Marino faces criminal cruelty-to-animals and other charges; her next court date is March 20. We will be there.

Casey was among the animals whose systemic neglect we documented in our undercover investigation of the self-proclaimed “hospice and rehabilitation center.” Our investigator routinely found Casey covered with her own waste and confined to a filthy crib, often without access to water. Routinely spending hours caked with excrement scalded the paraplegic Casey’s skin around her hindquarters and genitals. We learned that in recent months, Casey was mostly kept on a mattress surrounded by baby gates, where she often lay in her own waste; that at some point, she had bloody urine; and that Marino often bemoaned Casey’s “stink.” 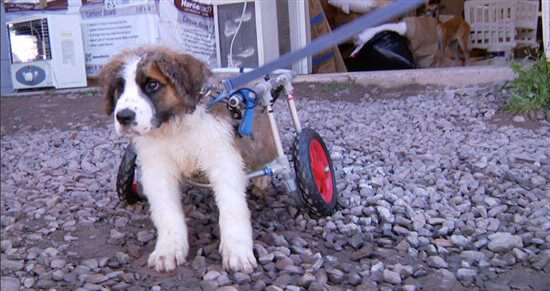 Casey was not alone in her suffering. Several of the animals whose suffering we caught on video have since died, including Tucker, a sweet little beagle-hound mix with hydrocephalus who allegedly drowned a few weeks ago, evidently after being left unsupervised. Our investigation exposed the following:

The Delaware County, New York, District Attorney’s Office filed charges of cruelty to animals and criminal possession of a controlled substance against Marino, but hundreds of animals still remain in Marino’s custody.

How You Can Help These Animals

Please urge the New York Attorney General’s Office to dissolve Angel’s Gate as a nonprofit corporation and make sure that Marino’s victims are immediately seized and helped.