No animals were arrested in the making of this protest, but yesterday in Zuccotti Park Liberty Square, a “pig,” “cow,” and “chicken” joined the Occupy Wall Street protesters to push for more corporate accountability. Our animals were at the center of a whirlwind of police, photographers, protesters, and intrigued passersby who stopped to read the animals’ posters and pick up copies of PETA’s vegetarian/vegan starter kit. 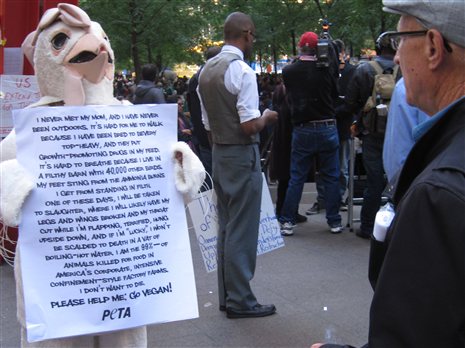 Bearing delicious vegan pizzas, the animals—representing 100 percent of the animals raised for food in the U.S.—brought attention to the fact that corporate greed is responsible for billions of animals’ being treated like cogs in a meat machine rather than the intelligent, sensitive individuals they are.

On factory farms, pigs have their tails and testicles cut off without being given any painkillers; cows are fattened for slaughter on barren, filthy feed lots; and chickens are crammed by the tens of thousands into airless sheds, where their accumulated waste results in ammonia-laden air that burns their eyes and throats.

To opt out of the corporate abuse of animals, order your own free vegetarian/vegan starter kit and get busy breaking down the barricades to protecting animals, your health, and the planet.