A harrowing day had a happy ending for one sweet bovine, thanks to a team of rescuers who refused to give up.

Indian animal rescue organization Animal Rahat (“rahat” means “relief”) was called to help a cow who had fallen into a 15-foot-deep, water-filled concrete gutter. She was terrified and possibly injured. A veterinarian with the group—which often works closely with PETA India—and three other staff members quickly gathered their gear and rushed to the scene. 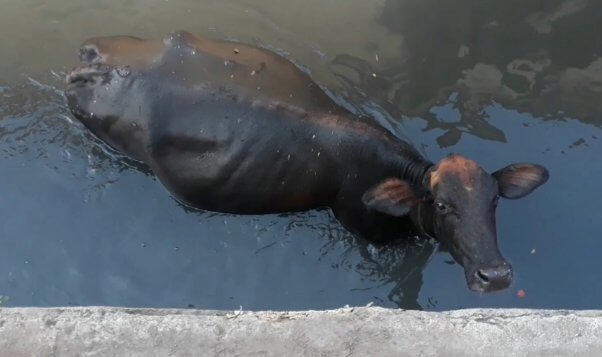 A crowd had gathered around the distressed cow and her worried guardian, but no one had managed to pull her safely out of the trench. The Animal Rahat team contacted firefighters, who arrived with a steel ladder, and the cow’s guardian quickly climbed down. But he had barely made it into the water when a floating piece of glass cut his leg and became embedded in his skin. With the guardian now in need of treatment himself, a member of the Animal Rahat team jumped into the gutter and took over. 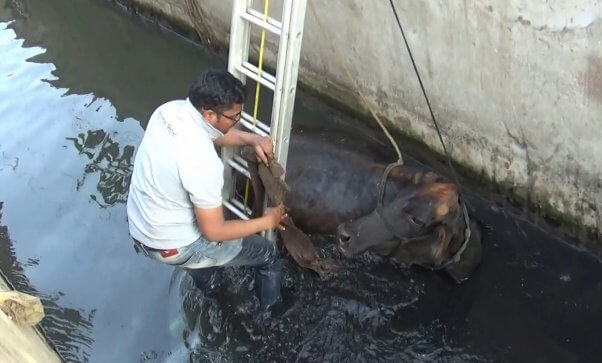 It took 30 minutes, but the team was able to locate a crane, position a series of ropes around the frightened cow’s body, and, finally, slowly lift her back onto dry land. The careful, determined rescue was all caught on video:

Asking the cheering crowd to disperse so that they could calm their distressed patient, the team rubbed and petted the cow to comfort her while the vet treated her for a cut to one of her legs and an abrasion below her eye. After a terrifying day, she was ready to go home to a hearty meal and her bovine best friend. 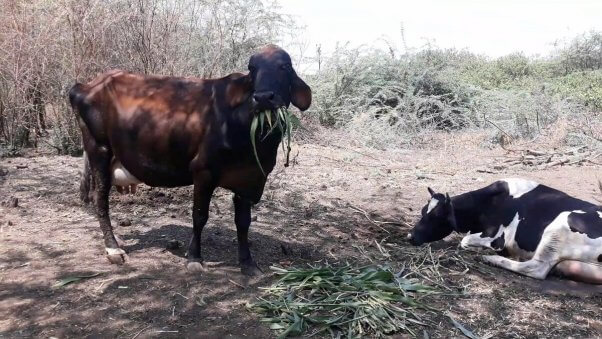 A few days later, when the cow and her guardian were both on the mend, they had some special visitors: the Animal Rahat team. Her ordeal over and her wounds healing, the grateful animal seemed to remember the people who had saved her life.

Please, never ignore an animal who is injured or in danger—you may be his or her only chance of survival. If you need help and authorities or animal control won’t provide it, please contact PETA.