In a horribly misguided attempt to teach Palestinian kids not to abuse animals, a show called Tomorrow’s Pioneers on Hamas’ Al Aqsa TV just featured a costumed “bee” named Nahoul tormenting animals. I watched the video (which I’m purposely not linking to), and I’m sorry, but showing a giant bee swinging cats by their tails and throwing rocks at caged lions is about the worst way I can think of to teach kids to be kind to animals. 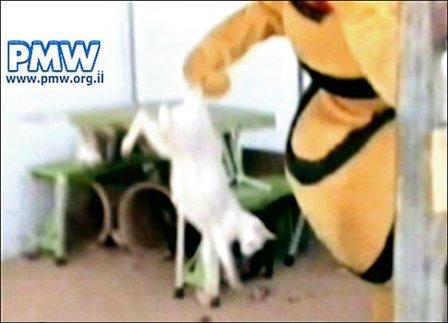 And yes, in case you’re wondering, this was the show that was criticized in June when it featured a character in a Mickey Mouse suit, who preached against Israel and the U.S. until an episode portrayed him being beaten to death by an actor playing an Israeli agent.

Anyway, here’s the letter we sent the producers. I’m sure we’ll hear right back from them. Yeaaaaaah.

PETA (People for the Ethical Treatment of Animals) is the world’s largest animal rights organization with 1.6 million members worldwide.

We have been made aware of an episode of Tomorrow’s Pioneers featuring a costumed character on the Hamas TV children’s show tormenting animals as part of a segment that is apparently meant to teach children to treat animals humanely. Unfortunately, while the intention of these segments may be good, the lesson is almost certainly lost on most children, who are more likely to imitate people they see treating animals cruelly rather than understand that this behavior is wrong. We are asking you to please refrain from harming animals in future episodes of Tomorrow’s Pioneers, even if the intention is to teach children a valuable lesson.

Studies around the world have found that a history of cruelty to animals is one of the traits that regularly appear in the records of serial rapists, murderers, and child abusers (because domestic abuse is directed toward the powerless, animal abuse and child abuse go hand in hand). If unchecked, this abuse can later escalate to abuse of their fellow human beings, completing the cycle of violence.

Demonstrating for children a respect for even the smallest and most defenseless among us can help them to value and respect and protect one another. We hope, for the sake of humans and animals alike, that future episodes of Tomorrow’s Pioneers will work to teach children to respect individuals of any species, no matter how “different” they may be, without demonstrating for them cruel behavior in the process.

For more information about teaching children about empathy and compassion, please visit: http://www.islamicconcerns.com/kids.asp.