After PETA tipped off local authorities that Lisa Lopez (an unlicensed animal exhibitor who operates under the name All Things Wild) was planning to display tigers illegally at the Cowtown Fair this week, Fort Worth, Texas, officials shut down the exhibit—on its opening day. Lopez was scheduled to sell photo opportunities with the big cats, which would have violated local laws prohibiting the possession of tigers and other wild or exotic animals.

Because authorities took swift action, these tigers won’t be forced to sit in a metal cage and pose for photos with fairgoers. PETA commends the city for sending the message that all unscrupulous exhibitors will be held accountable if they attempt to break the law.

Keep reading to learn more about Lopez’s long history of cruelty to animals and flouting laws plus how you can speak out for animals being exploited at other festivals and fairs.

If notorious All Things Wild operators Lisa Lopez and Marcus Cook really appreciated all wild animals, they wouldn’t have continued to exploit tigers for photo ops after the U.S. Department of Agriculture (USDA) terminated the license they were using to exhibit them. USDA documents show that the agency terminated original All Things Wild exhibitor Michael Todd’s license for illegally partnering with Cook—whose own license was permanently revoked after he was charged with nearly 100 federal Animal Welfare Act violations—and allowing Cook to conduct thousands of exhibitions. But neither that nor the USDA’s denial of a license to Lopez in 2017 stopped her and Cook from illegally displaying tigers at a Liberty, Texas, flea market on the weekend of March 19. But PETA wasn’t deterred, either: After we tipped off the USDA to the illicit exhibition, the agency issued a citation to Lopez and directed her to discontinue the illegal exhibits, as a just-obtained inspection report reveals.

During the event in March, the unlicensed Lopez offered photo opportunities with the tigers, who are confined to small travel trailers and hauled all over the country. According to Liberty city officials, she tried passing off another exhibitor’s license as her own to the flea market organizer. 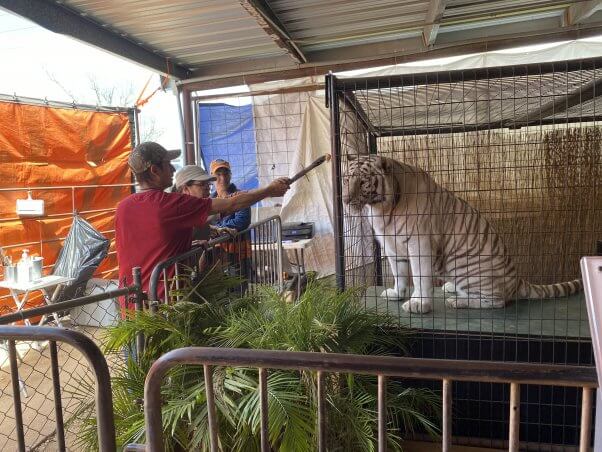 Keep scrolling to see All Things Wild’s lengthy and disturbing history of legal violations, including those of Lopez’s current business partner, Marcus Cook, and to find out how you can speak up for animals exploited for entertainment.

Even after Tiger King revealed the sordid underbelly of breeding and exploiting tigers for profit and even though they knew about the public safety risks and the termination of Michael Todd’s exhibitor license, Georgia State Fair operators still permitted Todd to operate his cruel tiger show, All Things Wild (aka “White Tiger Discovery”). And we aren’t having it. 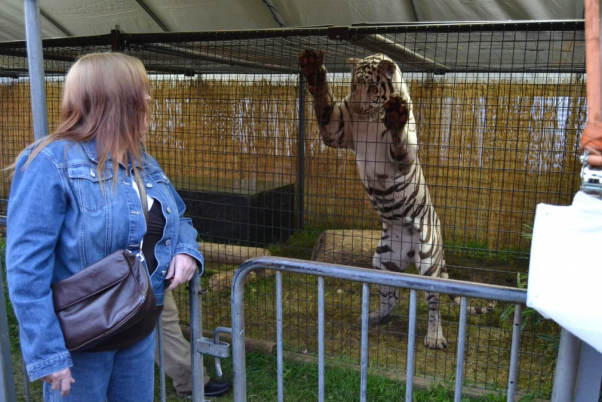 Even through his seedy menagerie’s name, exhibitor Michael Todd proves how out of touch he is: Tigers are not “things,” and the ones he exploits for profit know nothing of the “wild.”

We’re calling on the U.S. Department of Agriculture (USDA) to investigate Todd for exhibiting tigers at another event—the Alabama State Fair—last month as well as for this month’s rash appearance in Georgia. We’ve requested that the USDA act with urgency, as exhibiting tigers across the country at crowded fairs while allowing public feedings puts these susceptible big cats at risk of contracting SARS-CoV-2. 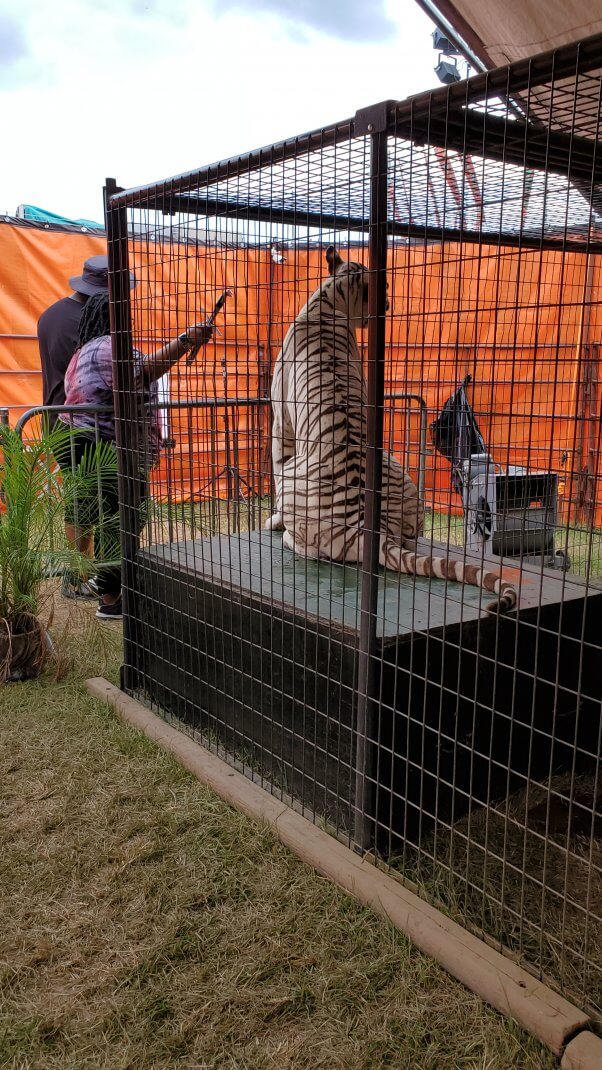 Despite the USDA’s physical-distancing guidelines and the fact that big cats can contract SARS-CoV-2, All Things Wild handlers at the Alabama State Fair in September failed to require that the public stay 6 feet away from tigers. They also allowed fair guests to hold tongs and feed tigers directly without wearing gloves, and there was no clear sign that the tongs were disinfected between uses.

We’re also urging the Georgia State Fair to shut down this miserable exhibit immediately and bar all cruel and dangerous wild-animal displays from future fairs. The Georgia State Fair employed Todd and his tiger exhibit despite being fully aware that his federal Animal Welfare Act (AWA) license was terminated last month—meaning that he cannot lawfully exhibit tigers—a fact that we point out in an urgent letter sent to Universal Fairs founder and President Mark Lovell. (Universal Fairs owns the Georgia State Fair.) The reason federal authorities terminated Todd’s license was because he employed disgraced animal exploiter Marcus Cook, who was cited for nearly 100 animal welfare violations—including for using a electric prod on a tiger and keeping cubs in a trailer with urine saturating the subflooring—before Cook’s exhibitor’s license was permanently revoked. Todd has a history of racking up citations for violating the AWA, too, including for inadequately training employees and failing to have safe barriers between tigers and the public. 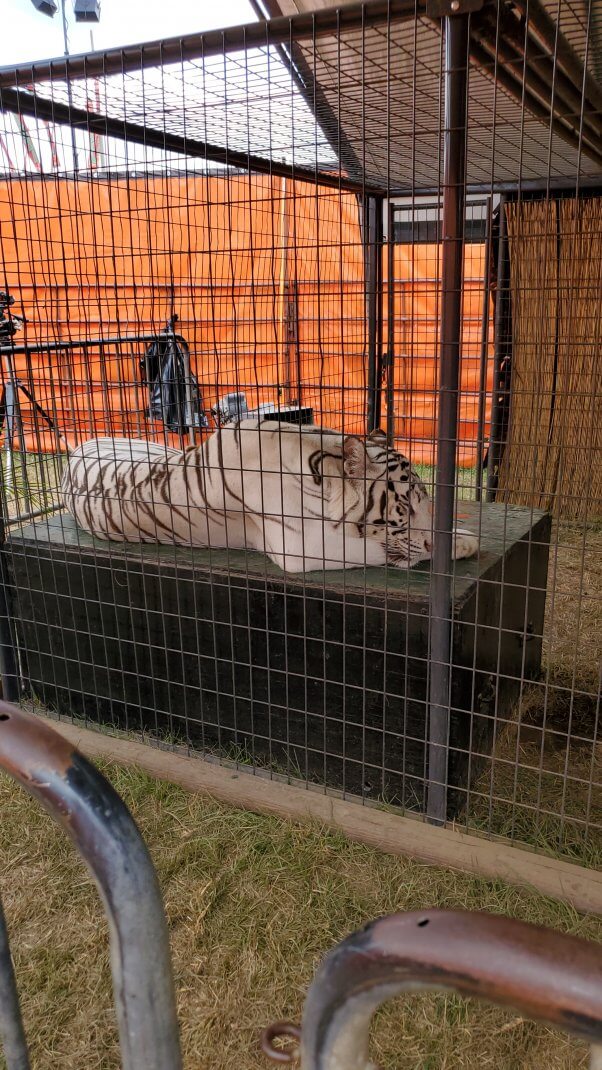 While tigers roam up to dozens of miles a day in nature, this one and others trucked around for gigs and forced to be on display by Michael Todd and his exhibitor cohorts are given just a few feet of space.

Todd and Cook have proved they have about as much respect for the law as they do for the animals they exploit—and that’s none at all. Tigers used for displays like Todd’s are carted around the country in small, barren cages and displayed in front of rowdy crowds. They are torn away from their mothers as babies and spend their days locked in cages. It’s standard practice to use physical violence and psychological domination to force them to perform. As a result of such mistreatment, big cats and other wild animals have been known to lash out—biting, mauling, or otherwise attacking members of the public.

A tiger attacked one of Cook’s employees and severed his ear, a cub bit a woman at one of his exhibits, and tiger cubs under his “care” injured children.

By denying these big cats the opportunity to run, climb, and swim—all the things they enjoy doing in nature—Todd is knowingly causing them psychological and physical distress.

Act With Urgency, Too—Speak Out Against This Unfairness

We’ve scored multiple victories for animals exploited for state and county fairs—such as when we persuaded Los Angeles County Fair organizers not to include any wild or exotic mammals in last year’s fair. And we achieved these wins with the help of kind supporters like you. Now, we (and more importantly, tigers) need your help again: Click below to join us in urging other fairs to do right by tigers and all other animals.