Those boots may be made for walkin’, but were they made from an animal’s sensitive skin? That may be the big question in the minds of travelers shuffling through the Memphis International Airport in the coming months.

In lieu of the nation’s financial crunch, the Transportation Security Administration has decided to allow advertising on the shoe/belt/bag bins at security checkpoints in order to bring in extra revenue. Well, you can bet we’re already all over this one!

In PETA’s letter to the CEO of Memphis International Airport, we are requesting the right to advertise an anti-leather ad (shown below) on the shoe bins. The ad features the photograph of a “missing” calf named Charlie, who was pulled away from his mother, most likely branded without any pain relief, and eventually slaughtered for his meat. And his skin was made into someone’s shoes, belt, or jacket—the very same items that get tossed into the bins at security checkpoints. 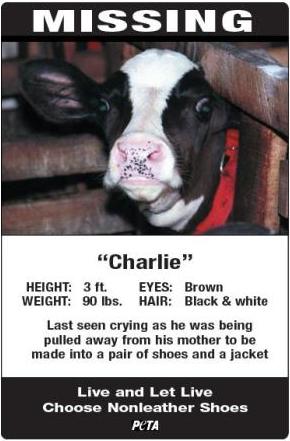 Airport advertising has the potential to reach gazillions of people, and by placing our ad in such a highly visible location we can help high-flyers get the message that leather kills—and make them think twice about their next purchases. Gorgeous, durable, cruelty-free shoes await their feet. Besides, the production of leather is catastrophic to the environment; planting a carbon offset tree for flight miles won’t cover that!