Imagine having a debilitating medical condition, suffering from aching joints and throbbing feet, and still having to walk every day to work, where you’d be kept on your feet constantly and forced to perform physical labor for long shifts. You’d be given no chance to recuperate (much less retire), and when you slowed down or balked, your boss would hit you with something like a fireplace poker or stick the pointy end under your chin and drag you around. When you weren’t working, you’d live in chains, and you wouldn’t even be given medication for pain.

That’s pretty much what life is like for Karen, Nicole, Bonnie, and Minyak—four elephants who are shunted from town to town by Ringling Bros. and Barnum & Bailey Circus: 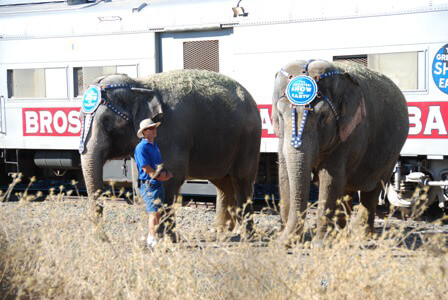 According to an independent veterinarian who examined the elephants as well as an elephant expert who observed the elephants as they limped out of boxcars and walked stiffly to the arena while the circus was in Sacramento, these four elephants are suffering from foot disorders and lameness consistent with arthritis—a painful condition that can be made worse by the awkward contortions of circus tricks and “life” on the road. Yet despite the vet’s recommendation that the elephants be excluded from performing certain routines, Ringling is going right ahead, forcing these hurting girls to strain their muscles and joints by doing tricks such as hind-leg stands.

Elephants are meant to move about—roaming for miles over grass and soft terrain and engaging in activities that come naturally to them—not to stand on urine- and feces-covered cement for hours on end or to be beaten and forced to walk across asphalt streets from the circus train to an arena.

Please join us in asking the U.S. Department of Agriculture (USDA) to immediately seize these ailing elephants before it’s too late: Foot disorders and arthritis are the leading causes of euthanasia in captive elephants.