Whenever PETA’s fieldworkers visited Duke—a sweet-natured pit bull mix chained in filthy conditions in rural North Carolina—all he really wanted was attention. He and the other dogs trapped on the Bertie County property were severely neglected and malnourished—tethered by heavy chains on the same small patch of dirt regardless of the weather, plagued by flies, yelled at or simply ignored by their owner, and denied desperately needed veterinary care, exercise, food, and even water. But despite this life of deprivation, Duke’s enthusiasm for human affection never wavered. When his PETA friends appeared, he unfailingly jumped, wiggled with joy, and flopped over for tummy rubs. 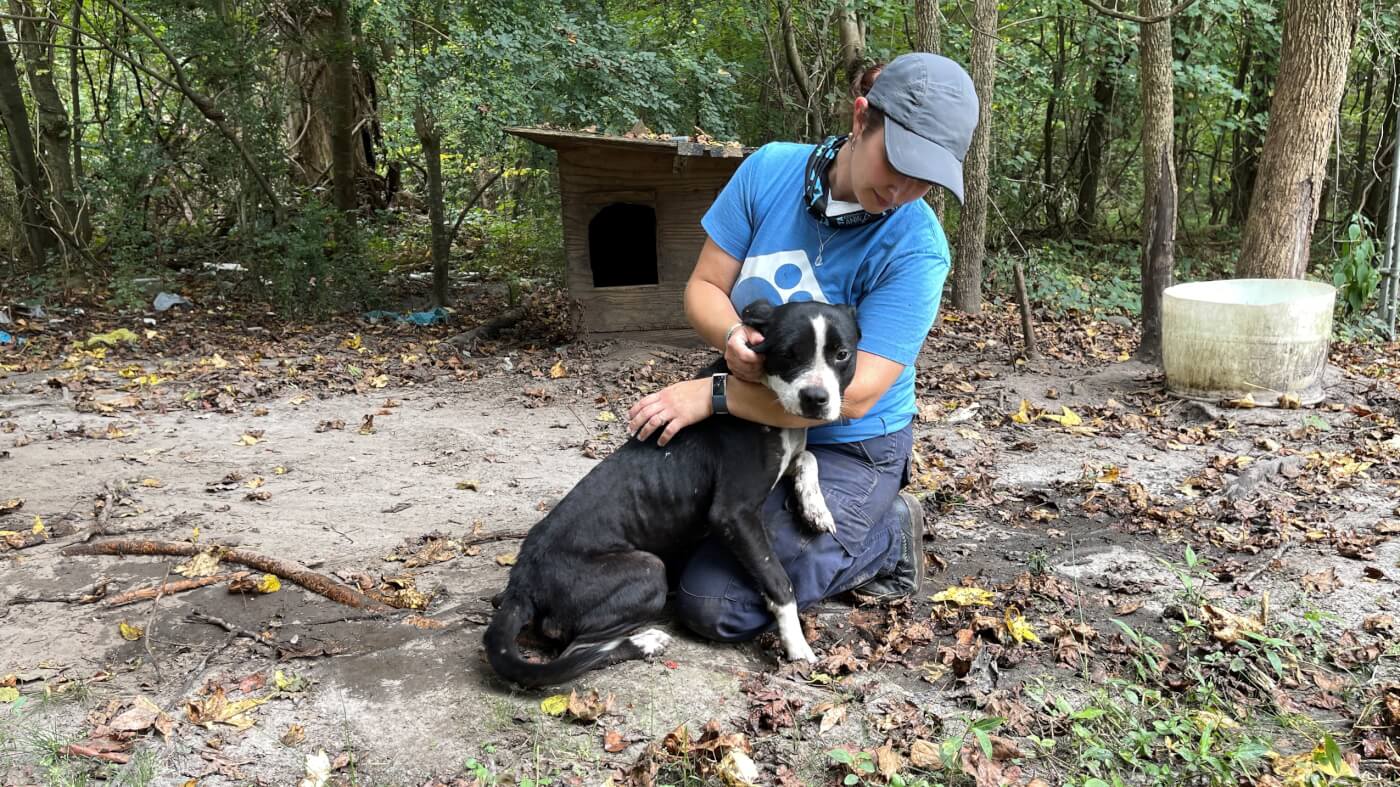 PETA’s fieldworkers returned to the property numerous times over about two years, giving the dogs food, water, doghouses, flea and flystrike preventatives, lightweight tie-outs and collars to replace heavy chains and painful choke collars, and—especially in Duke’s case—as much attention as they could. 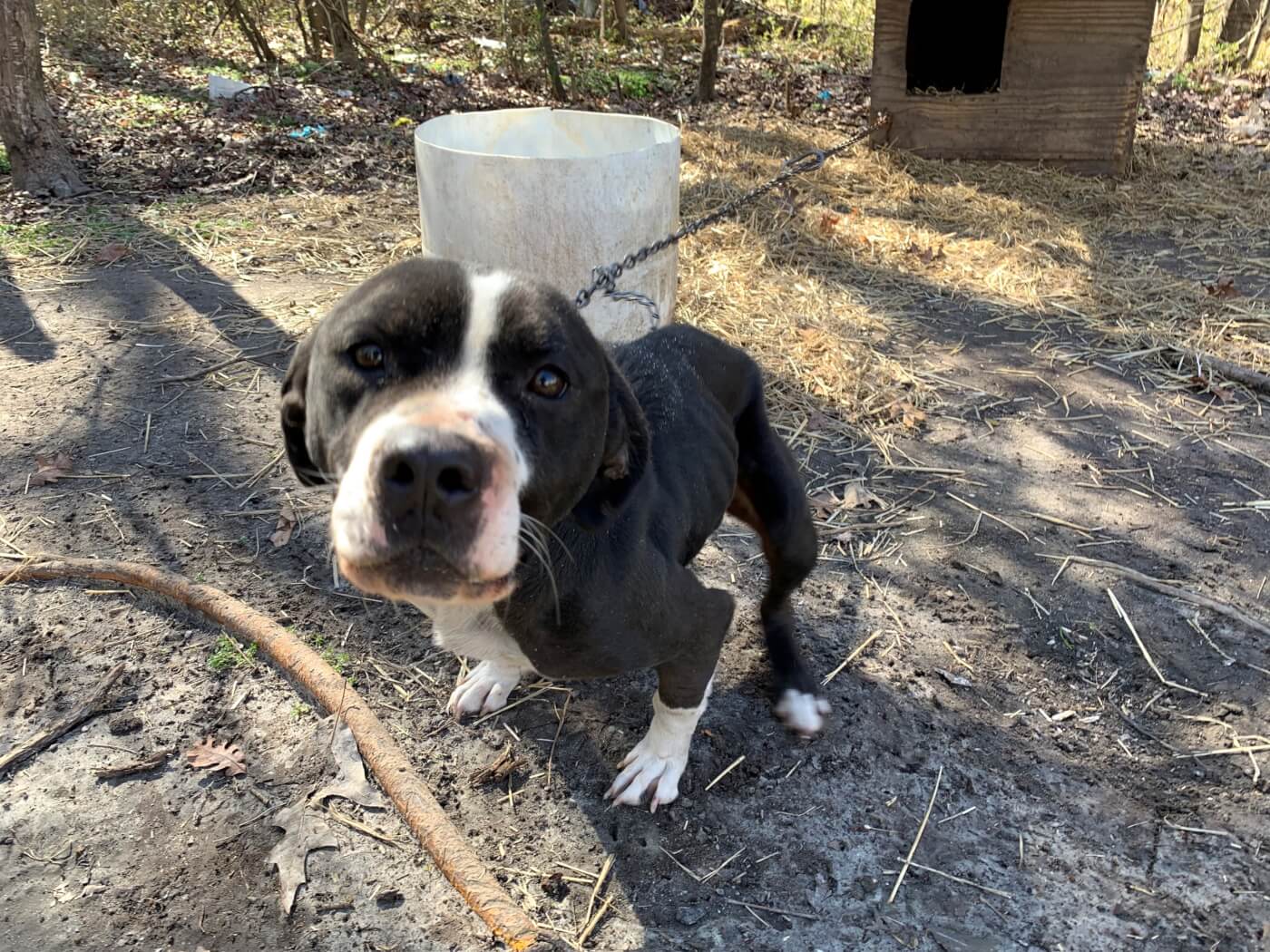 But despite PETA’s repeated attempts to inform the dogs’ owner about their most basic needs, one winter day, fieldworkers checking in on the dogs found the emaciated remains of Minnie—Duke’s daughter, another pit bull—still chained to her doghouse. A necropsy later revealed that Minnie had died of “starvation and extreme neglect.” The dogs’ owner was charged with seven counts of cruelty to animals for the prolonged neglect of Duke, Minnie, and five other dogs, and after a long legal battle, PETA was granted permanent custody of Duke and his fellow survivors. 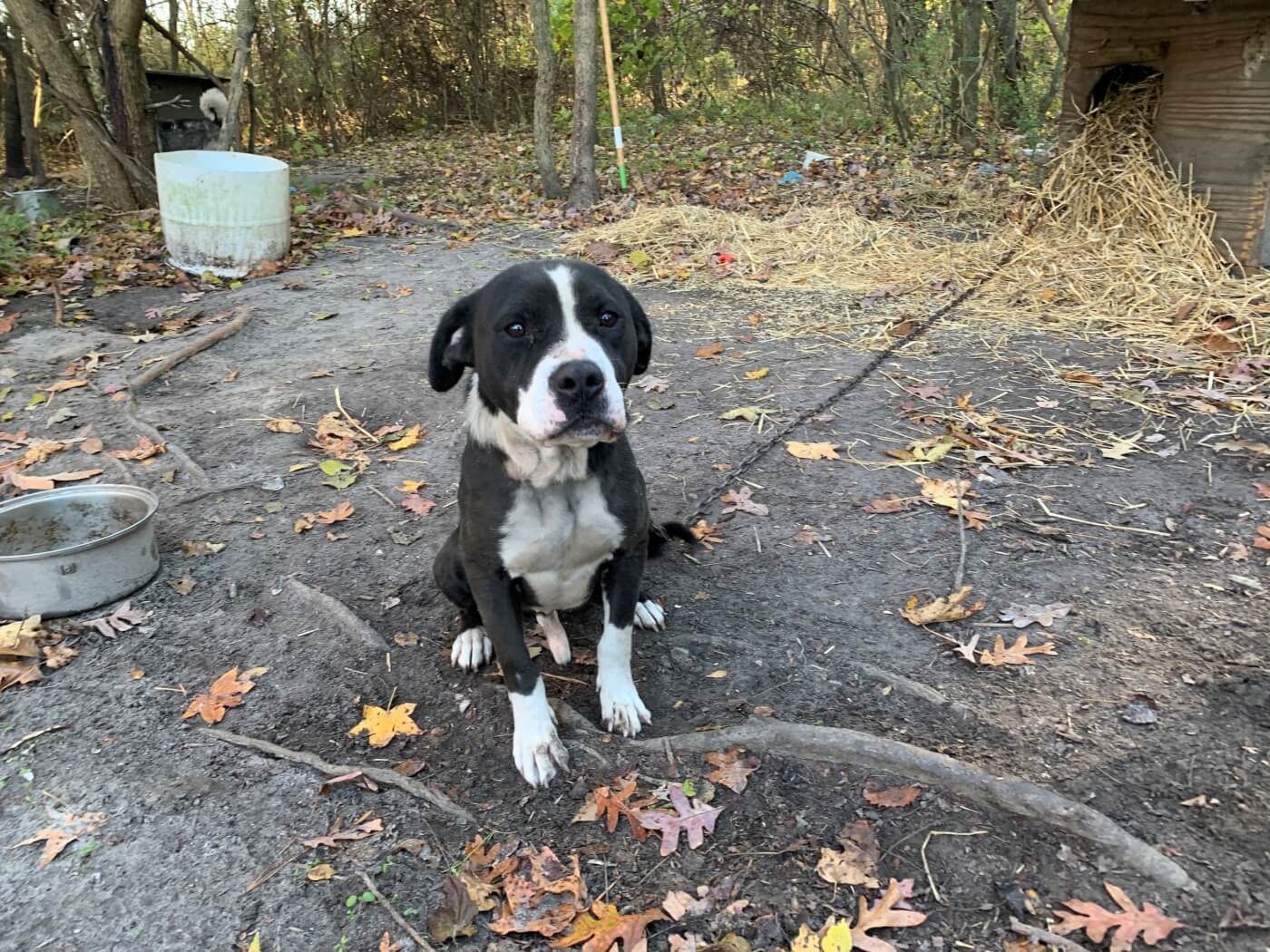 Now, after spending a few weeks at the Sam Simon Center (PETA’s headquarters in Norfolk, Virginia), finishing treatment for internal parasites (a result of being chained for years amid his own waste), being doted on by staff, and spreading his joyful slobber all over the office, Duke is looking for a permanent home and a devoted guardian to call his own. 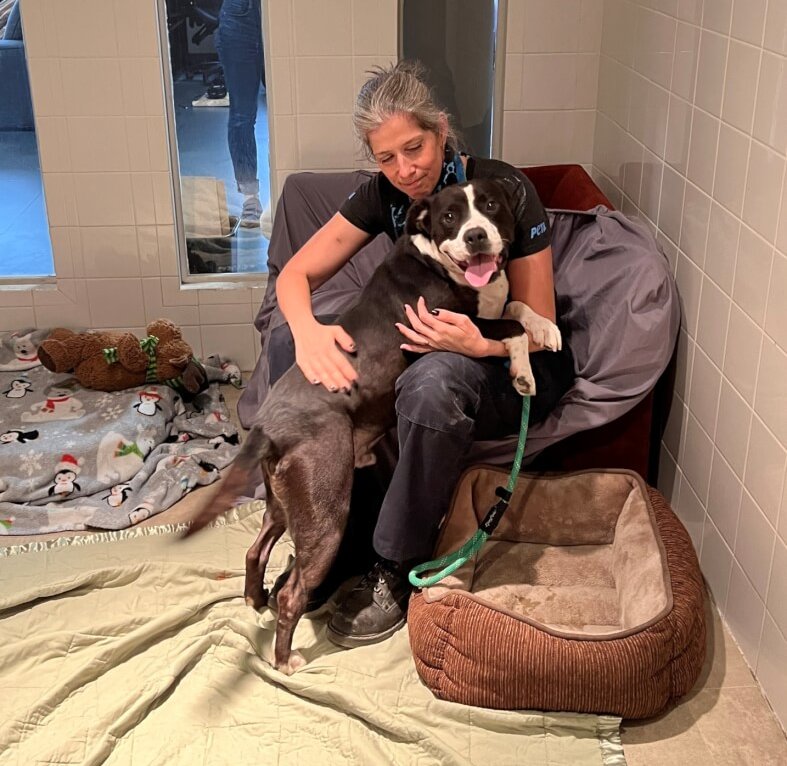 Despite being treated cruelly by his former owner, 4-year-old Duke hasn’t let that affect his cheerful outlook on life—he’s a grade-A goober. This 60-pound “bulldozer slash teddy bear” has no idea that he’s the size of a small horse and thinks your lap is a perfectly reasonable place to perch. His fun-loving personality makes him irresistible, and his goofiness is downright contagious. He loves long walks, playtime, and everyone he meets, human or canine. But he’s not fond of felines—his new home must be cat-free. 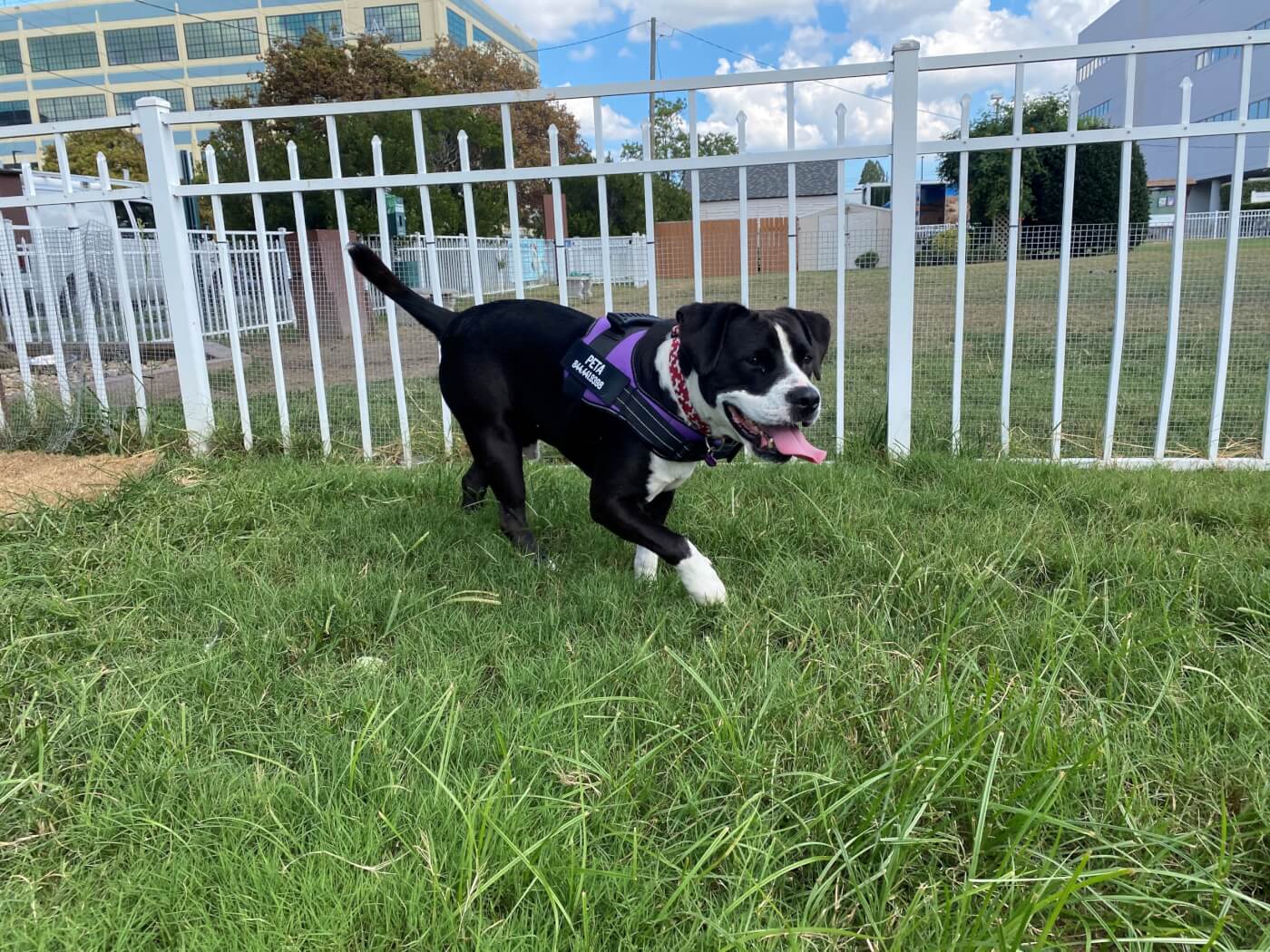 Duke’s new family will need to have plenty of space for this gregarious guy to run amok, the energy to keep up with him, and perhaps most importantly, an abundance of affection and respect for this beyond generous and forgiving pup. He’s housetrained, leash-trained, neutered, and ready to go—all that’s left to do is pack a suitcase full of his favorite toys. 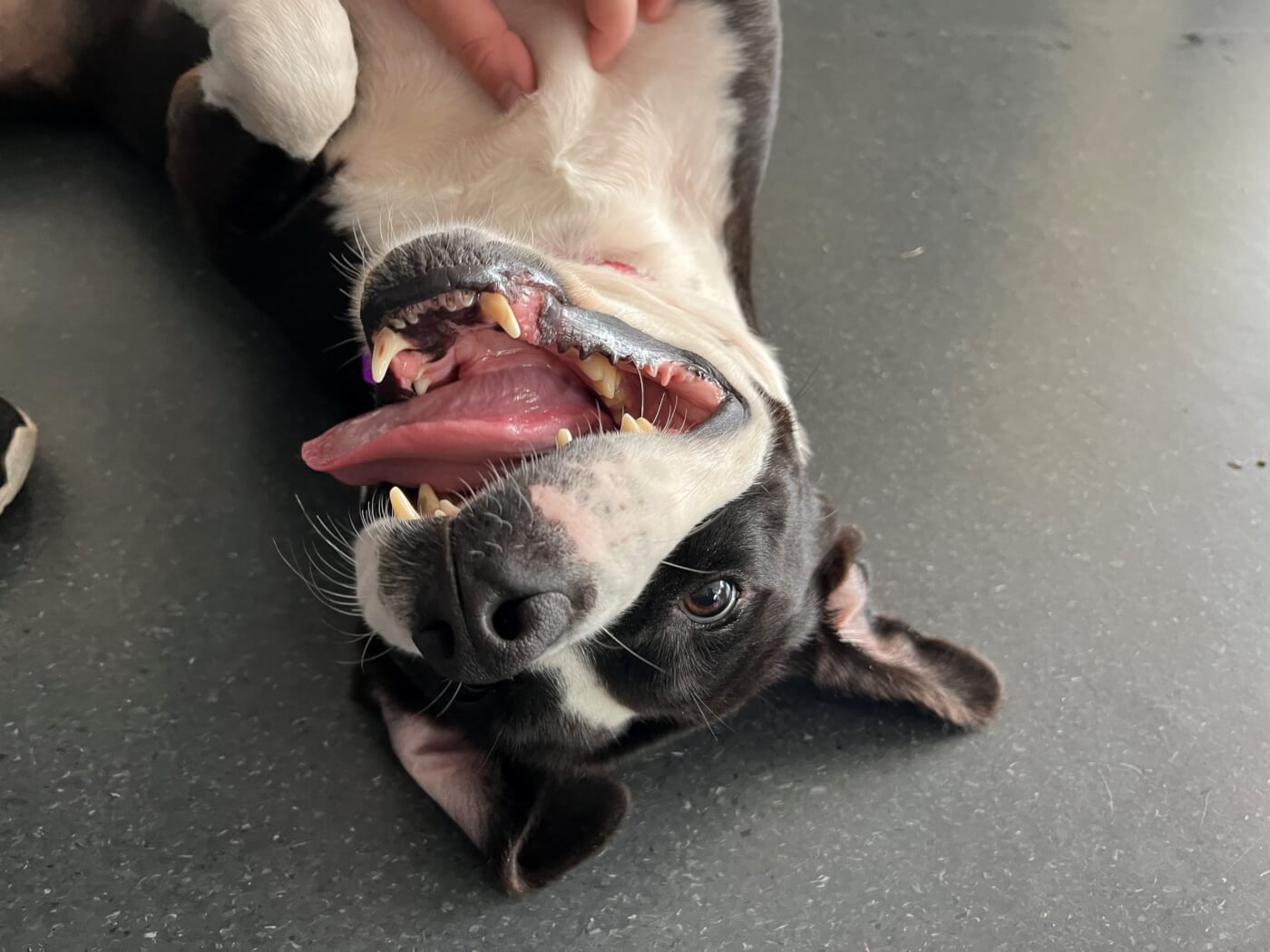 If your cup, like Duke’s, overfloweth with love—and you have the time, energy, and resources to provide him with the life he’s long overdue—contact [email protected] to learn more.

Learn More About Duke and Other Adoptable Animals