Animal advocates’ voices are being heard loud and clear today, as PETA and eight other animal protection organizations have joined forces to keep Ringling Bros. and Barnum & Bailey Circus from taking “The Cruelest Show on Earth” abroad—including to Mexico, where animal protection laws are virtually never enforced.

Ringling applied to export and re-import endangered Asian elephants and tigers based on an Endangered Species Act (ESA) exemption that permits transporting the animals for the purpose of enhancing the species’ survival. But animal rights groups from the U.S. and Mexico are calling on the U.S. Fish and Wildlife Service to deny the application because the only thing Ringling wants to enhance is its bank account. Not only does dragging endangered animals across the border and beating them in order to force them to perform not qualify for this ESA exemption, it also flies in the face of what the ESA was designed to do: protect animals. 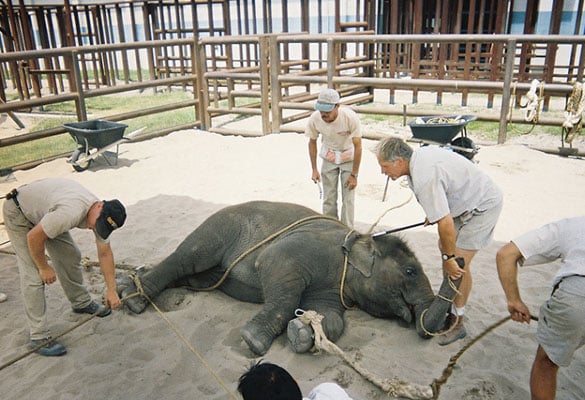 Big-Time Abuse Under the Big Top

Ringling just paid the highest penalty in circus history for its animal abuse—$270,000 for violations of the Animal Welfare Act (AWA). In the last few years, Ringling has racked up more than 50 violations of the AWA involving the care of big cats and Asian elephants. In fact, Ringling’s own documents admit what PETA’s investigation found: that its handlers beat elephants bloody with bullhooks.

But in the past, when the circus has gone to Mexico—where Ringling is exempt from even the minimal oversight that it receives in the U.S.—animal abuse has gone unrestrained. A Ringling handler was caught on video whipping a baby elephant in the face, causing the baby to screech and recoil. Handlers forcefully jabbed elephants with bullhooks all over their bodies, including inside their tender mouths and ears, and one handler was seen shocking an elephant with an electric prod.

PETA will continue to fight to keep Ringling’s animals on American soil, where they have at least some protection. Meanwhile, please urge the U.S. Department of Agriculture to seize Ringling’s ailing elephants and retire them to sanctuaries.