PETA and 85,000 supporters have e-mailed Priceline.com asking the company to stop offering bookings for exploitative elephant camps, but our pleas have been ignored.

This has to end. Elephants used for rides and other interactions with humans endure the constant threat of violence and are routinely kept chained.

Companies listen to their customers—please take the following actions to end Priceline.com’s support of elephant abuse.

Chat With Priceline’s Bot, and Urge It to End Bookings for Elephant Interactions

Not sure what to say? Use our sample comment:

I was shocked and disappointed to see that despite overwhelming evidence of the suffering that elephants endure at camps around the world, your company is still offering bookings to facilities that use these animals for rides and other forms of human entertainment. I won’t be using Priceline.com until it stops supporting elephant exploitation.

If the bot claims that the company doesn’t have elephant-activity bookings, pass along these URLs: https://www.priceline.com/travelguides/tgdetails.do?pageType=D&attrType=hotels&attrId=1920479#tab_ratings; https://www.priceline.com/travelguides/tgdetails.do?pageType=D&attrType=hotels&attrId=1918409.

Use Your Phone to Speak Up

Text TRIP to 73822 to send an e-mail to Priceline.com letting the company know that you won’t be booking with it until it stops supporting cruelty. 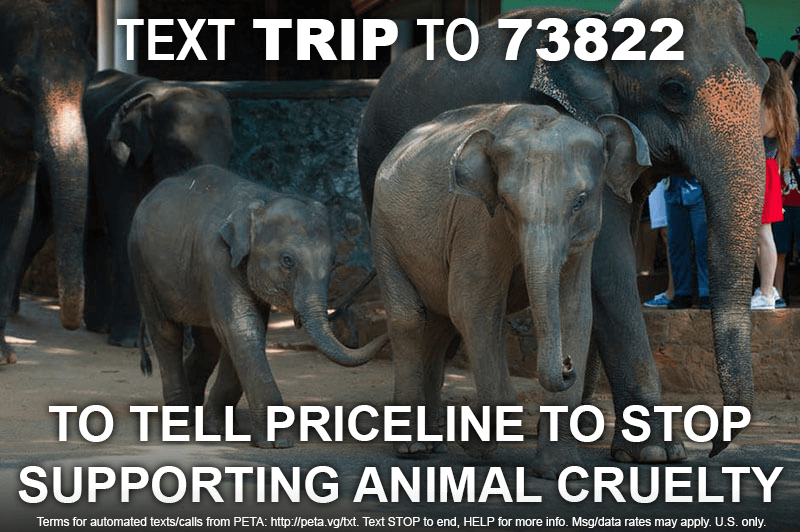 Leave a comment on Priceline.com’s Facebook page expressing your concern about its offerings that harm animals. Companies want to maintain a good reputation and public image, so tell everyone you know that this one supports elephant exploitation.

Want to Do Even More?