Updated: March 2, 2020
After hearing from nearly 100,000 PETA supporters, Alaska Airlines—the fifth-largest airline in the U.S.—has confirmed that its 40 years of supporting the Iditarod will end after this year’s race. PETA has been meeting with and pressuring the company for years, including by protesting at its corporate headquarters.

It’s plane obvious that the list of ex–Iditarod supporters is growing, but Alaska Airlines continues to sponsor the bloody race.

More than 150 dogs have died in the history of the Iditarod, and those are just the reported deaths. That number doesn’t include dogs who died during training for it or during the off-season while chained to plastic barrels or wooden boxes outdoors in the ice and snow. 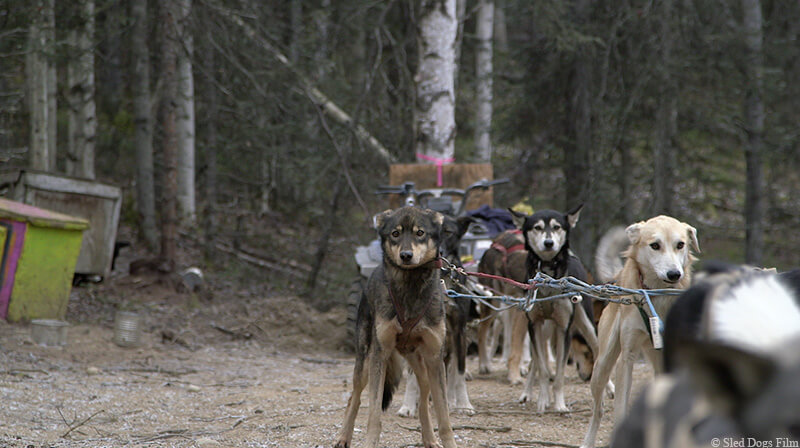 Alaska has some of the most severe weather on the planet, and the ill-fated dogs used in the Iditarod are forced to run approximately 1,000 miles through whiteouts, sleet, subzero temperatures, and biting winds—all while pulling heavy sleds, in under two weeks. Many pull muscles, incur stress fractures, or are afflicted with diarrhea, dehydration, intestinal viruses, or aspiration pneumonia—which results from inhaling their own vomit, a condition that killed a dog named Oshi in the 2019 race.

In late 2018 and early 2019, a PETA eyewitness worked at two dog kennels owned by former Iditarod champions and discovered that dogs were denied veterinary care for debilitating and painful injuries, workers struck and kicked the animals, and they were kept chained to dilapidated wooden boxes and uninsulated plastic barrels in the bitter cold.