Update: June 21, 2021
Despite countless desperate pleas from PETA and compassionate people worldwide over the span of months, Lola’s abuser apparently won’t face any charges in relation to the gruesome beatings that the dog endured in her final days. You may remember that Lola was seen being viciously attacked in three videos captured on two days. The Travis County District Attorney’s Office asserts that the evidence in this case doesn’t pass muster for felony animal torture and that Texas’ anti-cruelty statute doesn’t allow for misdemeanor charges for beating an animal.

We must not let Lola’s suffering be for naught. Texas residents should take this opportunity to contact their legislators and urge them to put forth a bill to strengthen the state’s anti-cruelty statutes. Tell legislators Lola’s story, and urge them to eliminate this legal gray area by adding more specific language to both the felony and misdemeanor sections of Texas’ anti-cruelty statute. Visit this website to locate your senator and representative.

Officials in Austin, Texas, have confirmed that the disabled senior dog reportedly named Lola—seen being viciously attacked in three videos captured on two days—has been euthanized. Reportedly, she was euthanized because of her medical condition rather than because of any possible injuries from abuse. Her suffering has ended, but authorities have apparently decided that no crime was committed—even though Texas’ anti-cruelty statute reads, “A person commits an offense if the person intentionally, knowingly, or recklessly … tortures an animal,” and defines “torture” as “any act that causes unjustifiable pain or suffering.” 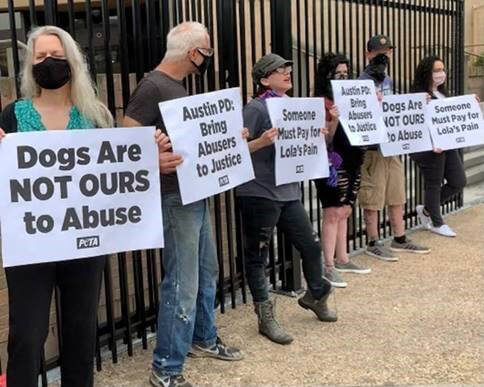 News sources also report that Lola’s abuser has been terminated from employment at a veterinary clinic. However, your voice is still needed to urge officials to hold her accountable for the pain and terror that this poor dog endured. Please politely urge the following officials to review the evidence again and consider filing all applicable charges:

After you’ve e-mailed officials, please comment on their Facebook pages as well—then forward this alert far and wide!