Bethesda, Md. – For Halloween revelers tired of dressing as Freddy Krueger, Darth Vader, or other fictional villains, this year PETA is offering an opportunity to dress as a real-life monster: Dr. Anthony Fauci, who the group says never met an animal he wouldn’t experiment on and who recently announced plans to step down as director of the National Institute of Allergy and Infectious Diseases (NIAID). Now available to order, the limited-edition costume consists of a mask, a white lab coat, an oversized syringe, and a stuffed beagle—like the dogs recently rescued from laboratory supplier Envigo following a PETA investigation—with  a “Good Riddance, Fauci” collar tag in celebration of the retirement.

The getup alludes to all the animals who were subjected to painful and pointless experiments under Fauci’s tenure in government, including beagles infected with a tropical disease and then killed after months of suffering, thousands of monkeys killed in failed AIDS experiments—which haven’t produced a single vaccine to prevent HIV—and dogs used in transgender experiments. 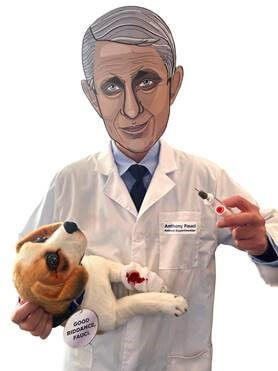 “Revelers dressed as Fauci can join the other ghouls on Halloween night,” says PETA President Ingrid Newkirk. “During his reign of terror, Fauci oversaw the imprisonment and deaths of tens of thousands of beagles, monkeys, and other animals in failed experiments. Our costume is a fitting tribute to his legacy.”

PETA hopes Fauci’s departure will make way for a forward-thinking NIAID leader who will implement state-of-the-art, human-relevant research methods that don’t use animals, such as those described in PETA scientists’ groundbreaking Research Modernization Deal.