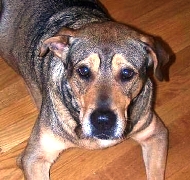 The following post was originally published by Karen on KP’s Dog Blog, May 19, 2008.

With each passing year, I relate better and better to my aging canine friends.

I had a cocker spaniel who lived to be 15 and a German shepherd who died at the age of 13, so I’m acquainted with many of the health problems of elderly dogs and holistic ways of addressing them. “Why use holistic methods?” you might ask. For the past 20+ years, I’ve found holistic methods to be gentler, less invasive, more natural, and more healing than conventional methods.

These tend to work with the body in a way that nourishes and heals it, rather than simply masking or suppressing symptoms, which are bound to resurface in a different way. Of course, there is a place for conventional medicine, but many chronic and old-age health problems lend themselves to holistic treatment.

In my view, the most important thing that you can do for your aging pooch is to stop vaccinating. Yearly vaccinations are by no means harmless and can damage the health of susceptible dogs both in the short and long terms. And the side effects of vaccinations can be cumulative from year to year.

Only rabies vaccinations are required by law (and skipping the rabies vaccine can lead to extremely dire consequences, such as being forced to choose between months-long isolation of your pup in a kennel or immediate euthanasia, so don’t do that). But none of the other vaccinations is required by law. Generally, one round of vaccinations during puppyhood should cover a dog for a lifetime, but if you feel uncomfortable skipping the yearly vaccinations, get a blood “titer” test done instead. This will indicate how much immunity your dog continues to possess and give you the scientific data you need to make an informed choice about vaccinating.

Dogs can also benefit from nutritional supplements, just as humans can. It’s important not to just give them willy-nilly but to do your research beforehand, as not every supplement can be given to both humans and dogs, although there is a tremendous amount of crossover. When giving dogs herbal supplements formulated for humans, follow the dosage on the label, according to your dog’s weight.

If a human should take two capsules twice a day and you have a 65-pound dog, then you can give your dog one capsule twice a day. For smaller dogs, you can buy empty capsules and use them to divide full capsules in half or into thirds or quarters. Many herbs come in liquid form as well, which makes it easier to administer them to small dogs (just a few drops in their food will do it).

Look for liquid herbal products containing glycerin, not alcohol. Always give supplements with food, unless otherwise indicated on the label. Here are a few suggestions for supplements and other holistic treatments for that canine companion “of a certain age”:

•Many older dogs begin to get cataracts or a condition called “nuclear sclerosis,” which also affects their vision, particularly at night. You can see a cloudiness forming in their eyes. But this can be prevented, arrested, and even somewhat reversed by providing your dog with antioxidants (such as beta carotene, vitamins C and E, selenium, and especially lutein) as well as bilberry capsules. (Legend has it that bilberry jam was eaten by World War II pilots to maintain their keen night vision.)

•To stave off hearing impairment, ginkgo and amino acids N-acetyl cysteine and acetyl L-carnitine, which act as antioxidants, are helpful. They are also good for slowing down mental decline, as is curcumin, a substance found in abundance in turmeric, that orange spice used in curry dishes.

•For improved digestion, which is really the foundation of good health, digestive enzymes added to the food will help immensely, as will probiotics like acidophilus, which will repopulate the intestines with healthy flora?particularly important after a round of antibiotics. And speaking of antibiotics, when your dog gets a cut or sore on the skin, there’s no need to rush to the vet for an antibiotic that is going to destroy your dog’s healthy intestinal flora. A little colloidal silver applied topically will keep it from getting infected. Colloidal silver, which contains tiny particles of silver suspended in water, yet looks and tastes the same as plain water, is said to be able to purify sludge!

•Creaky joints and arthritis are the bane of all old folks, whether human or canine. Fortunately, there is an abundance of holistic help available in this area. Veterinary chiropractic can straighten out a misaligned spine, which will improve overall health, as the spinal nerves extend out into the rest of the body, affecting everything. Helpful supplements for arthritis include glucosamine, turmeric, vitamin C, MSM, hyaluronic acid, and cetyl myristoleate. Also, exercise should not be neglected, although older dogs should stick to low-impact exercise, such as walking. As my mom likes to say, “Old ladies need to work hard.” I think those are wise words; use it or lose it.

•To keep the hard-working liver healthy, nothing beats milk thistle, which has been prescribed for human liver problems in Europe for years. Something else that’s good for the liver, as well as for the heart and the gums, is coenzyme Q10, a very powerful antioxidant. The oil-based form is about three times as potent as the water-soluble one, so you can buy it in a lower dosage.

•A multivitamin formulated for dogs is also a good idea kind of safety net in case there are any gaps in the dog’s diet or ability to absorb nutrients. Green superfoods, such as spirulina, barley grass juice powder, chlorella, wheatgrass, and alfalfa, can also fill in nutritional gaps and provide enhanced immunity. And many dogs do not get adequate omega-3 fatty acids in their diets, which will eventually catch up with them. Omega-3s are essential for healthy skin, supple joints, heart health, etc., so add them to the diets of all dogs, young and old.

And last but definitely not least in importance, do not obsess about your older dog’s health. Do what you can to support it, but do not replay grim scenarios of your dog’s impending brain tumor, senility, lameness, heart disease, or blindness over and over again in your mind ad nauseam. Your dog will pick right up on these negative thoughts and probably get the disease that you keep worrying about! So cut it out. Positive, healthy, happy thoughts only! Enjoy the time that you have together.