But a new invention from General Motors could make tragic deaths like these a thing of the past.

It’s a “rear seat reminder” alarm that warns the driver whenever anyone or anything—a child, a dog, or even groceries—has been left in the backseat of a vehicle by sounding chimes after the engine is switched off. This technology—which so far is available exclusively on the 2017 GMC Acadia SUV—is so innovative and potentially lifesaving that PETA is honoring General Motors with an Innovator for Animals Award. 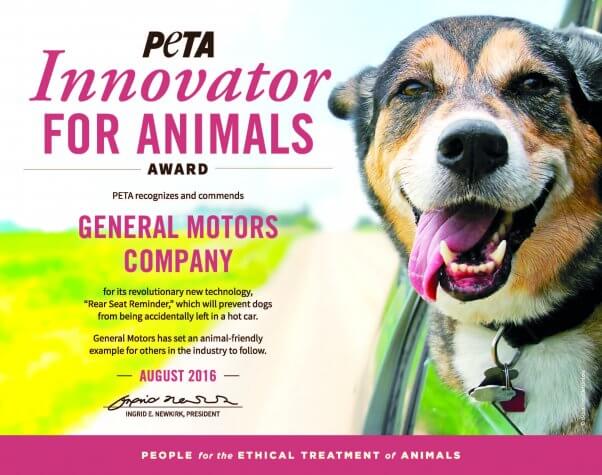 Parked cars can become lethal in a matter of minutes, even on a moderately warm day. On a 78-degree day, the temperature inside a parked car can soar to between 100 and 120 degrees in just minutes, and on a 90-degree day, interior temperatures can reach as high as 160 degrees in less than 10 minutes. Dogs are especially vulnerable because they can only cool themselves by panting and by sweating through their paw pads and can sustain brain damage or die.

If you see a dog in a hot car, contact the police immediately. While you are waiting for them to arrive, take down the car’s make, model, and license plate number. Then go inside nearby stores and ask the manager to have the owner of the vehicle paged. Stay with the car until the police arrive. If the dog shows any symptoms of heatstroke—including restlessness, heavy panting, vomiting, lethargy, or lack of coordination—it’s an emergency situation. Some states permit “good Samaritans” to break into cars to free animals in distress, but it’s best to allow the police to do this if possible.

Get a dog suffering from heatstroke into the shade immediately. You can lower the animal’s body temperature by providing the dog with water, applying a cold towel to the animal’s head and chest, or immersing the dog in tepid (not ice-cold) water. The dog should be rushed to a veterinarian as soon as possible.