Miss Universe Andrea Meza is taking her role seriously, helping to save animals—and the world—by eating environmentally friendly vegan foods. She posed in a colorful crown of fruits, vegetables, and flowers for a pro-vegan PETA ad because she wants to help stop animal suffering, help protect the planet, and promote healthy living. 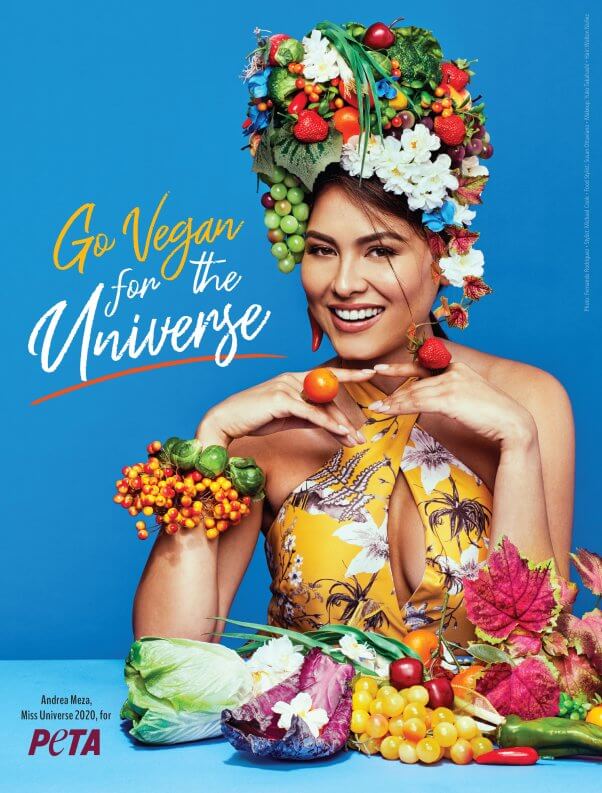 Andrea, who is Mexican, also starred in a short PETA video inviting people to go vegan in time to celebrate a vegan Christmas. She went vegan to help animals and the environment, and now she’s inviting everyone to celebrate Christmas with a vegan meal.

“You just have to adjust some things,” she says, telling people how easy it is to replace cow’s milk with almond milk, soy milk, or other plant-based milks.

She also encourages viewers to eat vegan meats, which can be found in every supermarket, rather than animal flesh, and suggests cooking with tofu, mushrooms, or other plant foods that have different tastes and textures to make your meal delicious.

Andrea rightly notes, “You don’t have to have an animal on your plate in order to share this beautiful time of the year with all your family.”

Try our festive recipes for a vegan Christmas. Have a happy and humane holiday!

What Are You Waiting For? Take PETA’s 3-Week Vegan Challenge