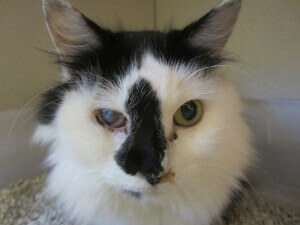 I loved Lilly very much, but I could not save her.

I don’t know who left Lilly at Caboodle Ranch, but I am sure that they’d never have done so had they known what she would go through. Lilly was just one of the hundreds of cats kept at Caboodle—but I will never forget her. I first noticed her on September 17, 2011. On October 6, I named her. Less than four months later, she was dead.

Lilly had a quiet, very delicate way about her. She was a gorgeous black-and-white cat with medium-length hair; a sweet, shy disposition; and distinctive markings, including a patch of soft black fur stretching from her forehead to her little nose. She was perfect.

For more than four months, I tried my best to get Lilly the help that I knew she desperately needed. I saw Lilly grow sicker and sicker from September 17 on, until she couldn’t even lift her head up on January 30, 2012—her last day on Earth. By that time, she was cold to the touch, unresponsive, and very weak. When I picked her up, she felt lifeless.

Over the months, despite my repeated efforts, I could not get Caboodle’s founder and operator, Craig Grant, to take Lilly to the veterinarian—even though I pointed out her obviously dire condition frequently and repeatedly. Craig consistently refused my suggestions—and pleas—that Lilly be taken to the vet, even when her eye was bloody, swollen, encrusted with hair and goo, and practically falling out of her head. Finally, her cornea ruptured. Yet, Craig turned down my offers to drive her to a veterinarian for treatment. He turned down my request to take her home so that I could try to nurse her back to health. He referred to Lilly as “the cat with the bad eye.”

You may be thinking, “Why didn’t you just take Lilly?” I wish I could have, but that would have meant not just breaking the law but also endangering the investigation and the welfare of hundreds of cats, including others just as sick as Lilly. 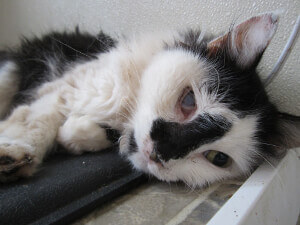 Lilly spent the last 11 weeks of her miserable life in Caboodle’s so-called “sick ward” trailer, where I saw her grow more depressed and withdrawn by the day. Lilly is part of a criminal case against Craig Grant now, so I won’t go into too much detail on the sad deterioration of her health. Suffice it to say that she suffered terribly and unnecessarily. But she was not the only one: So many cats were left to struggle with treatable “colds” that developed into serious, sometimes fatal, illnesses. They sneezed, they coughed, they drooled, they gasped for air, bloody mucus came out of their noses … and worse.

By the time you read this, the cats will have been rescued and given the veterinary care that they so desperately need. That’s wonderful news for the survivors. But for Lilly, the seizure of the animals came too late. I spent a lot of time observing and getting to know Lilly. Throughout the time that I knew her, her life consisted of absolutely nothing but pain and misery. She knew no joy. I was hoping that Lilly would be able to hold on just a little bit longer and that I would be able to get her out and get her emergency care. My biggest regret is that I was unable to do that for her. I never got to meet the cat who she was before she became sick.

I may not have been able to save Lilly’s life, but I hope that people will be able to learn from her death and her story so that she will not have died in vain. I don’t know where Lilly came from, and I may never know, but throughout my time at Caboodle I saw hundreds of cats left at the facility. They were left mostly by people who had good intentions but felt that they had nowhere else to turn. I spoke with many of these people and their stories were similar: Their cat was urinating in the house; they were moving and couldn’t take their cat with them; the cat was a stray and they didn’t have “the heart” to take them to an animal shelter.

Whatever the case was with Lilly, she, along with hundreds of others, ended up at Caboodle. I want Lilly to be remembered always. I want people who have cats to go pet and play with them, and I want people who don’t have cats to consider adopting one or two if they’re prepared to provide a loving forever home. I want people to realize that animals, like people, aren’t perfect, and they shouldn’t be tossed aside because of that. I don’t want there ever to be another story like Lilly’s.

Please be sure that only trustworthy people are entrusted with the care of your companion animals. Things are not always as they seem. Do your research, investigate, and always put your animals’ best interests first.

Click here to go back to the investigation’s main page.