On the heels of trainer Doug O’Neill’s win at the Kentucky Derby with I’ll Have Another, The New York Times reported that in the past 14 years, O’Neill has had nearly that many violations for giving horses illegal performance-enhancing drugs. That O’Neill could be forcing horses to run when they shouldn’t may account for the fact that the horses he trains sustain breakdowns or injuries more than twice as often, on average, as other thoroughbreds. Yet even with multiple drug violations, O’Neill is still sought after. Little oversight and lenient penalties make it too easy for him and other trainers to drug horses and get away with it. 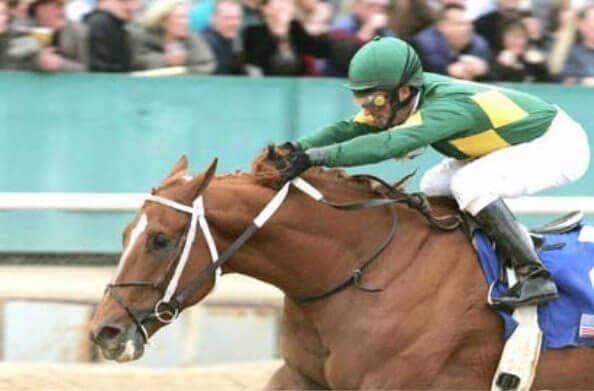 banamine|cc by 2.0
The U.S. is the only country that still allows routine and extensive use of drugs in horse racing, despite the overwhelming evidence that drugs are deadly for horses.

In fact, of the top 20 U.S. trainers in 2011, only two were never cited for a drug violation, according to Racing Commissioners International.

Leading trainer Todd Pletcher, who trained 2010 Kentucky Derby winner Super Saver, has been suspended several times for drug charges, fellow top trainer D. Wayne Lukas was caught running horses with cocaine in their systems, and Darrel Delahoussaye and Patrick Biancone have both had numerous drug violations, including citations for using snake venom. Rick Dutrow Jr., who trained 2008 Kentucky Derby winner Big Brown, racked up so many drug violations that he was banned from all New York racetracks for 10 years.

Last year, after a congressional hearing on the use of drugs in horseracing for which PETA supplied information, the Interstate Horseracing Improvement Act of 2011 was introduced, which would ban the use of performance-enhancing drugs and require that the winner and one other randomly chosen horse be tested for drugs at all races.

Please take a moment to ask your representatives to vote in favor of this much-needed legislation.