Sometimes, even compassionate people seem to disregard fish. I know: I was one of them. Years after I stopped eating meat, I identified as a vegetarian but would still have a little sushi. It was a long time before I realized—thanks to PETA—that fish are sentient beings who feel pain acutely and struggle against death. Perhaps a few other people are having their own “aha” moment right now, thanks to PETA Germany’s recent victory for fish.

Acting on a tip, two PETA Germany investigators joined some tourists on a crab fishing boat operating along the northern coast. The crab fishing itself wasn’t illegal, but the way the anglers were tormenting their “bycatch,” fish, certainly was. Under German law, fish must be instantly killed or placed in water after being caught. But these anglers were catching several fish in their crab traps and leaving the unwanted animals to asphyxiate to death on the boat. They even laughed about the animals’ struggle to breathe before they died. 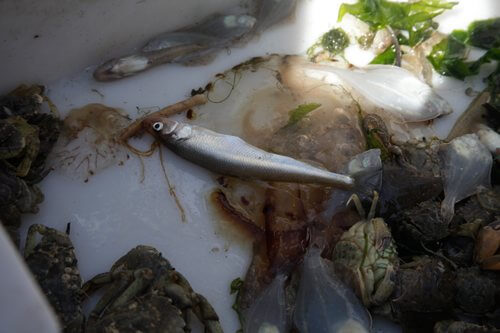 The investigators shot video evidence and began throwing suffering fish back into the water. Then they filed a complaint with the Hamburg District Attorney’s Office, and the court slapped the owner of the boat with a fine of 400 euros (about $540). He and his crew will likely be taking fish protection laws more seriously now.

If you know someone who claims, “I’m a vegetarian, but I still eat fish,” perhaps you can mention this story as a way of illustrating that fish feel pain and, like every other animal, deserve to be free from suffering.