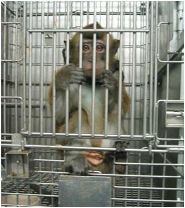 Conditions for animals who were tormented in experiments at the University of Wisconsin–Madison (UW-Madison)—where sheep were abused and killed in cruel and illegal decompression experiments, among other horrors—are apparently so bad that they have prompted one of the university’s own veterinarians, Richard “Jim” Brown, to call it quits over animal welfare concerns.

Some of the issues Brown complained about included that pigs were transported in an open pickup truck during the bitter cold of winter, rats and mice died after being deprived of food and water, and insects were flying around in a room in which a primate was undergoing surgery, creating unsanitary conditions. Brown’s complaints were apparently met with contempt, and he says that he faced reprisals for speaking up for animals.

These allegations aren’t surprising, considering UW-Madison’s sordid history of Animal Welfare Act violations and its refusal to release information related to the university’s invasive and deadly taxpayer-funded eye-movement experiments on monkeys and cats. In fact, the U.S. Department of Agriculture (USDA) is currently investigating UW-Madison for its ongoing failure to comply with federal animal welfare laws.

Will the loss of one of its own prompt UW-Madison to clean up its act? We’ll keep you posted, but in the meantime, let’s continue to speak up for the countless animals who are suffering in laboratories at UW-Madison and on college campuses across the country.