The animal experimentation industry exists in the Land That Time Forgot. While the world keeps spinning and technology leaps forward—pushing humanity to rapidly increasing advances previously thought impossible—animal experimenters cling to the rusty past.

Why Animal Experiments Belong in the Trash Heap of History

Humanity can now play with remote control cars that we put on Mars—on Mars!—but animal experimenters still strap monkeys into restraint chairs developed in the 1950s, when people made phone calls by sticking their finger in a hole and pushing a plastic dial around.

Cruel animal experimenters use the same metal poles, barren cages, and even guillotines to torment and kill animals that they have used since Dwight D. Eisenhower was president. They torture animals in experiments cooked up in the deepest of fever dreams, despite knowing full well that more than 90% of basic research, most of which involves testing on animals, will fail to do any good for humanity. 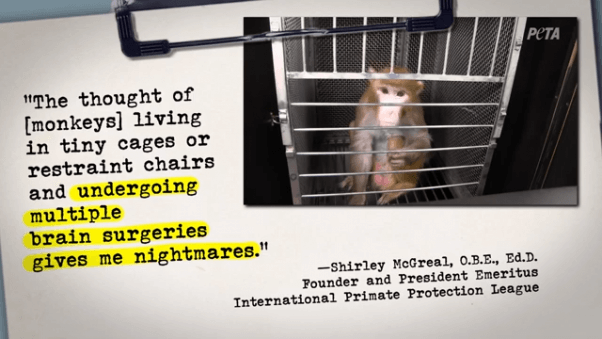 Here’s a case in point: Elisabeth Murray, a National Institute of Mental Health experimenter whose experiments on monkeys are as medieval as they are pointless, has been carving into monkeys’ skulls, scrambling their brains, and then subjecting them to their worst fears for more than 30 years. No cure or treatment for humans has come from it—nothing. 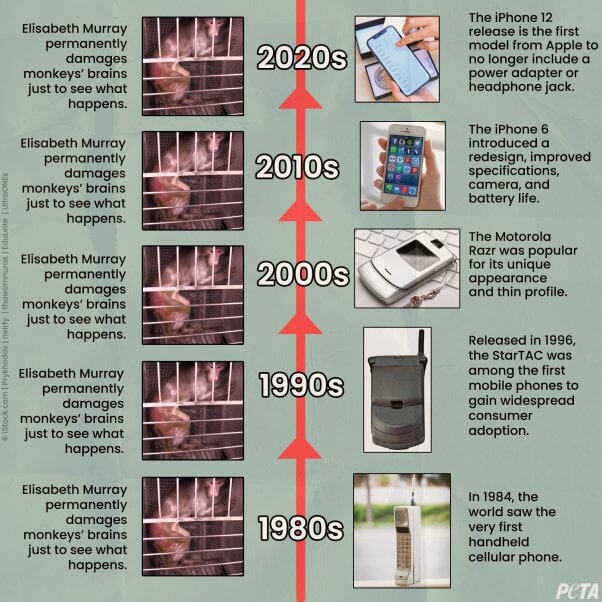 This is not the 1400s. Each of us carries around a powerful computer in our pockets that has 100,000 times the processing power of the computer that landed humans on the moon, for goodness’ sake. Murray could use one of several safe, reliably tested, non-animal methods to study brain activity for exactly the types of behavior she is trying to measure in monkeys.

After PETA released footage of brain-damaged monkeys being terrorized at a National Institutes of Health laboratory, protesters descended on the Department of Health & Human Services building in Washington D.C. to demand an end to the tax-payer funded experiments.

Experimenters Must Join the 21st Century

In today’s world, you can stream a live video feed from space to check in on International Space Station astronauts and order a to-go coffee from your favorite java hut—simultaneously. Our technology is more advanced than ever, while animal experimenters have not kept pace. Murray must stop killing monkeys and pretending it’s science. Doing so would not only end the misery of untold hundreds of monkeys but also advance research that actually stands a chance of helping people who desperately need it. 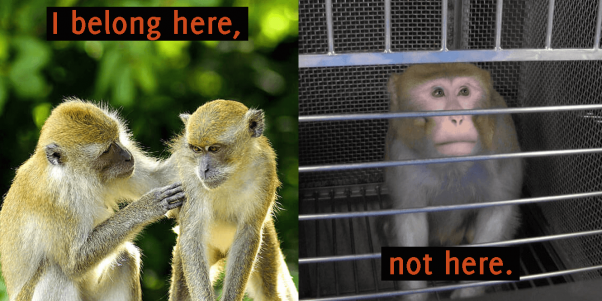 Humans did not walk on the moon by continuing to do the same things we had done 30 years before. A bold, new path was charted, one that was previously unheard of and thought impossible. If science is truly meant to be a learning experience, a journey of discovery, then animal experimentation—including Murray’s experiments—has already told us what we need to know: It’s time to move on.