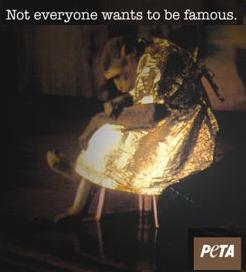 PETA’s campaign to get the great apes out of advertising has been hitting some pretty big home runs lately—by way of a recap, our ad in Variety magazine calling for Hollywood insiders to blow the whistle on animal abuse received international media coverage. Then, shortly after that, I brazenly took credit for Speed Racer’s poor box performance on this very blog.

Raising awareness about the campaign is all very well, but it’s also nice to have something to show for it, and the recent decisions by multi-billion-dollar companies Subaru and CDW not to renew their ad campaigns featuring great apes are very real victories along the way to getting great apes out of advertising for good.

Subaru was given a PETA Compassionate Business Award last month after they made the following promise:

“Due to the issues surrounding their use in the entertainment industry, Subaru of America will not employ primates in its advertising in the future.”

The folks at computer-equipment company CDW did things the other way round—they moved on to an ape-free ad campaign after we gave them a Litterbox Award for animal-unfriendly advertising (for the commercial with the dude and the chimpanzee setting up an office on a desert island).

But no matter how they come about, these are big victories, and it’s great to see major companies taking responsibility and helping other executives realize that any time an ad company suggests they trot out a chimpanzee for a new campaign, it’s time to hire a new ad company.

P.S. This just in – MovieTickets.com have just confirmed for us that they’ve ceased airing their ads which featured chimpanzees, and that they will no longer use great apes in their ad campaigns. Boo ya!