Today, PETA released its statistics on the number of animals it took in, found wonderful homes for, and had to euthanize in 2010. The number of animals who are discarded by people each year is staggering, and that won’t change until our laws do, so PETA is once again calling on governors across the U.S. to end animal homelessness by pushing for laws that would require dogs and cats to be sterilized unless their owners purchased an annual breeding permit, the cost of which would fund low-cost spay-and-neuter services. Would you join us by asking your governor to join this effort?

Numbers can’t begin to tell all these animals’ stories. Have a look at just a few of the animals we’ve helped, and then read about all that PETA does to end the suffering of animals in its own backyard in southern Virginia and northeastern North Carolina.

PETA’s fieldworkers are on duty around the clock, often getting up in the middle of the night and driving for miles to respond to emergency calls about suffering, abandoned, neglected, and abused dogs and cats. On weekends, PETA’s volunteer winter “straw teams” comb neighborhoods looking for dogs who are kept chained or penned outdoors in bone-numbing cold. They urge the dogs’ guardians to take their forgotten companions indoors. If they refuse and are not in violation of current cruelty-to-animals laws, PETA’s fieldworkers begin a long-term commitment to improving these neglected animals’ lives. They provide the dogs with doghouses; straw bedding; food; clean water; lightweight tie-outs to replace heavy, tangled chains; deworming medicine; flea, tick, and fly repellent; free veterinary care; spaying and neutering surgeries; and priceless moments of love and companionship.

PETA also coordinates the rescue of dogs like Rambo, who was left without food or water and was horribly emaciated and starving inside his filthy pen, and Sheba, who was found suffering from severe wounds caused by a metal chain that had become deeply embedded in her neck. In these cases and many others, PETA saw to it that cruelty charges were filed against the animals’ owners.

Many of the animals who are signed over to PETA, such as this poor dog and cat, are at the end of their lives or have suffered long-term neglect:

Turning away cats and dogs like these just to avoid having to euthanize them doesn’t help unwanted, suffering, and dying animals. If PETA, like a disturbing number of shelters today, valued its statistics more than the well-being of individual animals who need help, animals like Tupac would be left to endure slow, agonizing deaths instead of being gently released from suffering in the arms of those who were probably the first and only people to ever truly care about them.

When PETA received Tupac, he was about 20 pounds underweight, and his ribs and spine were protruding. His head was swollen to twice its normal size from a massive growth that reeked of infection and was oozing with sores and maggots. A vet recommended euthanasia, which was, without a doubt, the most merciful thing that anyone could have done for him. 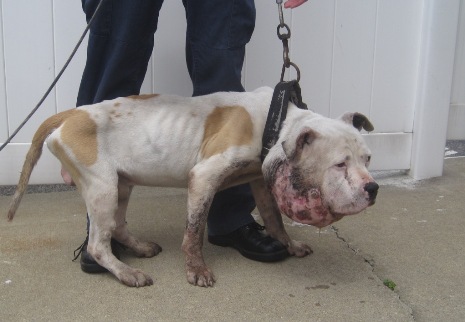 While a disturbing number of animal shelters are turning their backs on animals so that they can call themselves “no kill” shelters, PETA will always do what’s best for animals who need help—even when doing so is difficult and unpopular.

Check back tomorrow to learn about the amazing strides that PETA is making to reduce animal homelessness. I can’t wait to share it—PETA’s mobile clinics sterilized more than 10,000 animals in 2010 alone!