The PETA staffers who exercise at a gym near our headquarters in Norfolk, Virginia, began noticing a lonely betta fish in a vase on the reception desk. 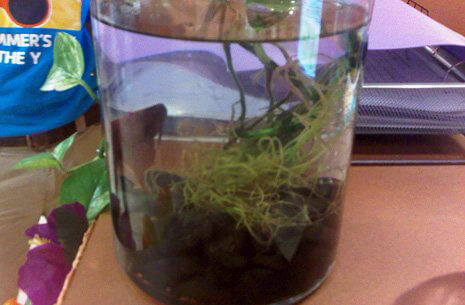 They expressed their concerns to the management, who agreed to let PETA set up a larger tank for the fish (since named Scar). Even better, while PETA was arranging for a suitable aquarium for Scar, the gym decided to go ahead and turn him over to us. A former PETA staffer took him home to live in a roomy tank with other rescued fish and snails. 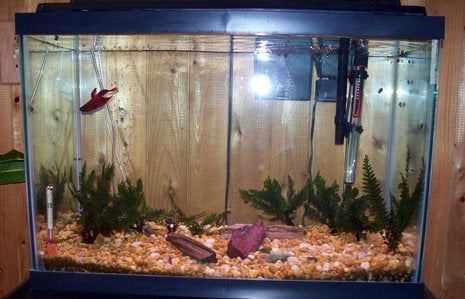 It’s a common misconception that bettas can survive in tiny bowls or vases. In nature, bettas eat mostly insects and insect larvae, and they die slow, painful deaths from starvation if they are provided with only plant roots for food. Being kept in a vase with a plant also restricts the fish’s access to oxygen, which they take mainly from the surface of the water. It’s also a myth that bettas must be housed singly—female bettas can be housed together, and male bettas can live with other species of fish.

Please don’t buy betta fish or patronize stores that sell them. And steer clear of Kimpton hotels, where patrons are invited to “rent” a betta during their stay. You can help by e-mailing the Kimpton Hotel & Restaurant Group and urging it to end the fish rental program.
Written by Michelle Sherrow