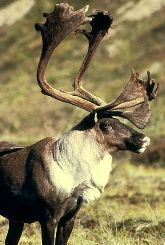 Not content with bludgeoning fish to death, Sarah Palin has now gone out and shot herself a caribou on her reality TV show Sarah Palin’s Alaska. PETA V.P. Dan Mathews blasted the trigger-happy Alaskan: “Sarah seems to think that resorting to violence and blood and guts may lure people into watching her boring show,” he said, “But the ratings remain as dead as the poor animals she shoots.”

After successfully “taking” a caribou (it took her almost as many tries as it did for her to graduate from college), Palin proudly proclaimed that taking the life of another sentient being gave her “a great feeling of accomplishment.”

We rather think that the accomplishment of these Alaskans, who reportedly saved four deer who were in danger of drowning, is a bit more impressive.