Animal advocates are up in arms over San Francisco’s new plan for keeping panhandlers off the streets. The city wants to pay panhandlers who are staying in publicly funded housing $75 per week to foster “problem” dogs from San Francisco’s animal shelter. But as a letter that PETA sent to Mayor Edward M. Lee points out, “Handing over troubled animals to troubled people will save neither, and it places both at risk of injury, further trauma, and a bad end.” 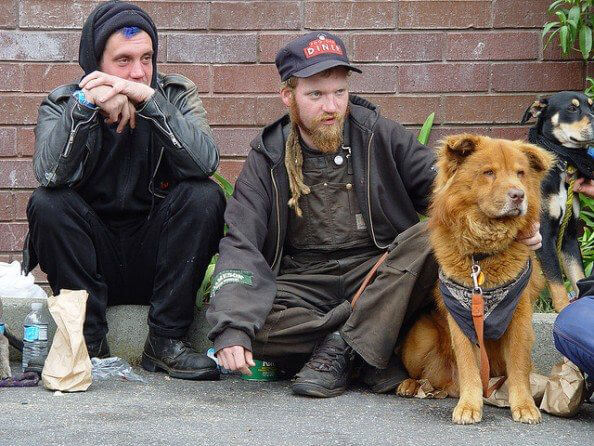 Many homeless people are battling substance-abuse or mental-health issues. If they are unable to adequately meet their own needs, the last thing the city should do is saddle them with the needs of another individual. And while the organizers of the WOOF program (which stands for Wonderful Opportunities for Occupants and Fidos) say that the panhandlers will be screened to weed out anyone who is still living on the streets or is severely mentally ill (emphasis added), they say nothing about the foster caregivers’ lack of experience dealing with traumatized dogs with special needs who are “rowdy, hyper or too shy to interact with humans.” The last thing the city’s most vulnerable dogs need is to be put in a precarious situation and exposed to improper, counterproductive, or (heaven forbid) cruel training methods, which could result in their being bounced from one foster home to another and make their behavior problems worse, not better.

PETA has offered to give San Francisco $10,000—the amount of the private grant that the city received to start the program—if it would instead pay panhandlers to perform any other service for the city, such as leafleting for spaying and neutering.

Please e-mail Mayor Edward M. Lee and ask him to place the city’s indigent population in jobs that won’t risk hurting them or dogs.