I don’t know why people keep sending me pictures of scantily clad girls, but as long as they do I’ll keep posting them.

Here’s what rock star activist Ashley Fruno has to say about her demo yesterday: “It was REALLY cold (only 32 degrees, but snowing really hard), we cut the demo off after an hour because I thought I might pass out.” Honestly I don’t know what she’s complaining about. I admit that a paperboard sign doesn’t do much to keep the body warm, but look at that warm hat. Doesn’t like 90% of body heat escape from the head!?! She looks toasty to me. She was probably passing out from heat exhaustion. 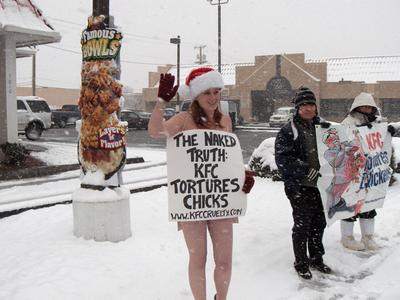