Our fearless campaigners have been hard at work exposing cruelty to animals—and sometimes quite a bit of themselves—all across the country!

A Lowe’s in San Diego received a visit from a bikini-clad “mouse,” who lay in front of the store on her own glue trap. In case you didn’t know, Lowe’s still sells hideously cruel glue traps— the kind in which animals can suffer for days before succumbing to starvation, dehydration, suffocation, and shock. 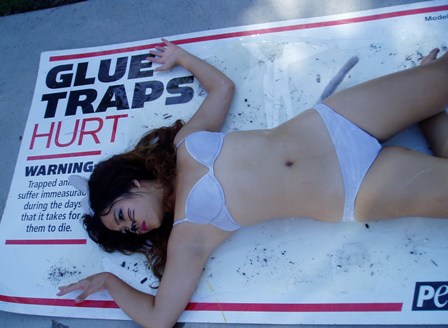 Meanwhile, PETA demonstrators have been visiting cities in Iowa and Nebraska to show the eating populace exactly what factory farming means for animals with these eye-catching gestation crate sculptures. It’s hard to buy ham and Spam when you are crying!

Finally, our “tiger” visited some cities in the southeastern U.S., where she sat in a cage to demonstrate the cruelty of Ringling Bros. and Barnum & Bailey Circus. Shreveporters were especially interested to see our tiger, because the last time PETA came to their town, the demonstrators were dragged off by the police! This time, law enforcement officials behaved themselves. Our tiger also captured a lot of attention in Little Rock! And, while we’re on the subject of Ringling Bros.—we heard that Hansons Windows, a home repair company in Michigan, was offering free circus tickets. No, that’s not the great news—the great news is this: When we wrote to the folks at Hansons Windows and explained to them how animals in Ringling circuses are beaten, forced to perform tricks, and kept in chains or tiny cages for most of their lives, the president of Hansons ended the promotion!

Kudos to Hansons Windows for making the compassionate choice—and kudos to our campaigners for the great demos!