This Monday, Morrissey played a sold-out show at the Norva, a few blocks from PETA HQ here in Norfolk, Virginia. I tried, desperately, to get tickets—but that’s another story. According to my more fortunate colleagues who did attend the show, Morrissey stopped three songs in and announced, to thunderous applause, that he was “very gratified.” He continued, “You haven’t even heard what I’m gratified about yet. I’m very gratified to be so close to the international headquarters of the People for the Ethical Treatment of Animals.” The audience responded with enthusiastic cheers, which is a good sign that Morrissey’s fans are all either exceptionally animal-friendly or just very polite. But the best part of the show came near the end, when Morrissey started riffing on Madonna and her fondness for fur:

“I wouldn’t be surprised if she made that African boy into a coat and wore him … for 15 minutes, and then threw it away.”

Zing! The story found its way onto VH1’s The Sizzler last night—you can check that out here.

Just in case you weren’t aware, our Morrissey’s a big fan of animals. 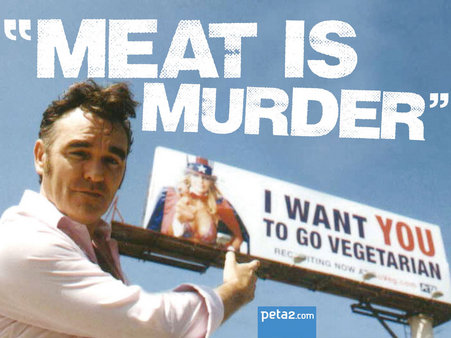