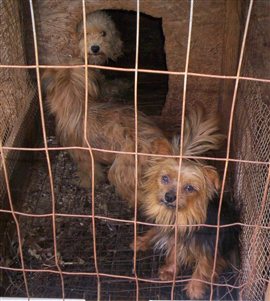 In what could prove to be a groundbreaking case for the legal rights of animals, New Yorker Elena Zakharova is suing a pet store because of the chronic pain that her dog, Umka, suffers from as a result of hip and knee problems, which she attributes to the dog’s puppy mill origins.

While New York has a puppy “lemon law” that allows buyers to return dogs with medical problems, Zakharova refuses to send Umka back to the store as if she were a defective stereo. If the court rules in Zakharova’s favor, it could set a precedent under which pet stores would have to pony up, as well they should, to guardians of puppy mill dogs who incur bills associated with medical problems caused by negligence or a deliberate lack of appropriate early care. This could, in turn, squelch puppy mills, which confine dogs to small, filthy wire cages as mere “breeding machines” and allow them to suffer from untreated illnesses and injuries.

We will watch and hope for the best in this important case for “pet shop pups.”