Just as David Novak, CEO of KFC’s parent company, Yum!, stepped up to address a crowd of Louisville business owners yesterday, two animal rights activists entered the stage, commandeered the mic, and told the assembled captains of Kentucky industry that “David Novak tortures animals,” a reference to the millions of chickens who have their wings and legs broken in shackles and transport crates and are scalded alive (among other abuses) by KFC suppliers because KFC won’t take any action to stop it.

The women were removed by security, but their words had already caught the attention of reporters and was front-page news on the Louisville Courier-Journal‘s Web site.

Consummate “suit” that he is, Novak proceeded by leading the crowd in the “Yum! cheer” (which we assume is not to be confused with the Bronx cheer that KFC so richly deserves).

Novak also—presumably with a straight face—told the crowd that he rewards outstanding employees with rubber chickens. I’m not making that up. “It does not take a lot of money to give away a rubber chicken,” he said. It wouldn’t take a lot of money for KFC to implement the minimal animal welfare standards we’ve asked for, but that’s not of any interest to him. Who came up with this business model—Stalin?

We have some lovely shots of PETA protesters outside the event. Check it: 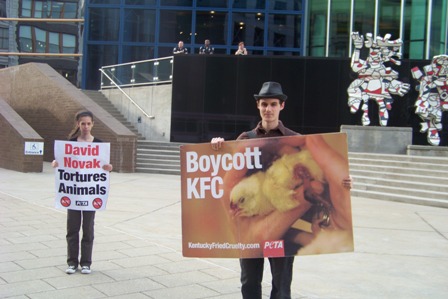 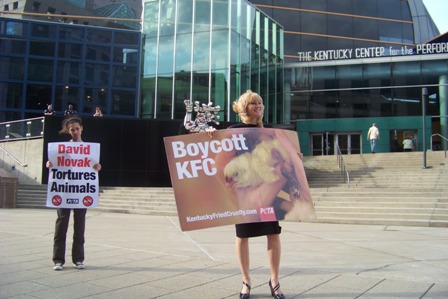