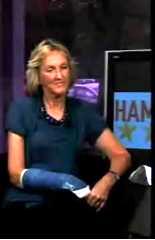 After I posted a recent interview featuring PETA President Ingrid Newkirk, a lot of people have been asking how she ended up with a cast on her arm. When I asked her how it happened, she told me she’d broken it while disciplining her assistant, Starza, but—difficult as Starza can doubtless be sometimes—I suspect that the truth isn’t quite so dramatic. The closest I could get to full disclosure was an article that came across my desk a few days later that’s slated for the next issue of PETA’s quarterly magazine Animal Times. It’s a great little piece, so here it is for anyone who’s curious about how Ingrid ended up with that cast. Warning: this is a classic bait and switch—she’s going to turn the tables on you and make you think about, like, animal suffering—but as I say, it’s a great little piece.

“Just as I was setting out to launch my new book, Let’s Have a Dog Party!, I met a wet floor and went splat, neatly snapping the bones in my wrist. Ooh, the pain! Thank goodness for IV drips. Lying on the emergency room gurney, I thought of a seagull I had seen with a broken wing who was being tormented by boys, of the fox in our fur-farming video with a broken leg, and of the monkey who caught his arm in a laboratory cage and broke it. How had they coped without pain relief of any kind? And not just with the screaming pain of their injury, but with the simultaneous fear of attack by the humans who were clearly out to harm and even kill them? Even though they may try to hide it, animals feel pain just as much as humans do.

While researching our Animal Liberation Display, we found that during the days of human slavery, whites claimed that blacks did not experience pain as acutely as whites did. Blacks’ stoicism in the face of total domination, like that of animals today, was taken as positive proof that they were almost immune to physical pain. The same mindset allowed families to be torn apart because Africans were also, most conveniently for their owners, thought not to have the same emotional and familial ties. Some mothers walked a dozen miles every night, after a day of hard field work, to glimpse or hold a child sent to another plantation.

Families are still being torn apart. Chimpanzees used in “cute” ads like those for computer supply company CDW, which earned this year’s top Litterbox Award, are just babies, torn away from their mothers and forced to dress up in silly costumes and grimace for the camera (minus their canine teeth, which are always pulled). By the time they are 8 years old, they are too strong to be managed and are “retired” to filthy, depressing roadside zoos or laboratories, never to see their families again.

Times change and victims’ identities shift, but old, worn-out, flawed arguments remain. Please join us in vigorously bursting these balloons that drift everywhere around us. Every word spoken, every myth challenged, and every pamphlet posted and video link shared puts a pin in them. Thank you.”
-Ingrid Newkirk