Dennis Lehane—the author of bestsellers-turned-blockbusters Shutter Island, Mystic River, and Gone Baby Gone—is offering a lucrative award to the person who returns his beloved dog, Tessa. Lehane has promised to name a character in his next book after the rescuer—a book that could quite possibly become a major motion picture. Tessa jumped the fence at the Lehane home in Massachusetts, but she is microchipped, so hopefully the pup will soon get a happy ending.

Newlywed Drew Barrymore and all her family members are living happily ever after. She says that her dogs, Douglas and Oliver, dote on new baby Olive: “They’re so protective of her. They’re so sweet.”

It looks like Bradley Cooper’s love of his sweet rescued dogs is rubbing off on his girlfriend, Zoe Saldana. Zoe tweeted a picture of her new rescued pup, Mugsy, and bragged, “She’s adorable and super-smart.” 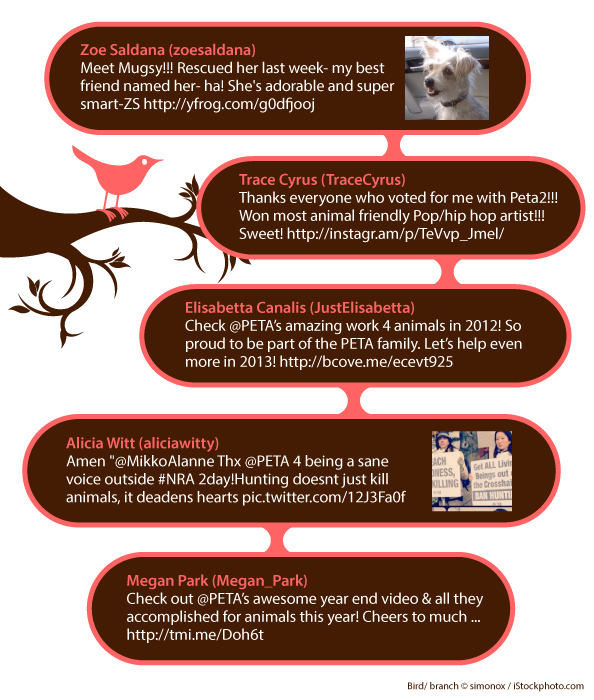 The Wanted’s Jay McGuiness wants an animal-friendly date with Eliza Doolittle. “We’re both vegetarians so that’s how it works, isn’t it? It’s practically legally binding,” he joked.

All Jenny McCarthy wanted was her pre-baby body back—and she got it by going primarily vegan. “[Cutting out gluten and dairy is] the best health change I’ve ever made,” she gushed to Shape magazine. “I lost a few pounds and have much more energy.”