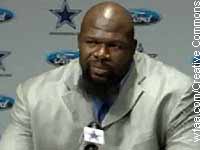 Like most serious Redskins fans, I have sworn a solemn oath never to say something nice about a Dallas Cowboy, which—as you can imagine—makes this extremely difficult for me. But the unavoidable fact of the matter is that PETA is giving a much-deserved award to Leonard Davis, a Cowboys offensive lineman who went out of his way to rescue a stranded horse when he discovered the animal stuck belly-deep in mud near his home. Evidently, our heroic horse-rescuer noticed that the horse, Ranger, was stuck in a sinkhole across the street, rushed to fasten straps around the animal, then used his John Deere tractor to pull him free from the mud. Davis then hosed Ranger down, as neighbors and emergency responders looked on. To thank him for going above and beyond to save Ranger’s life, PETA has given the Cowboys guard its “Compassionate Action” Award, along with a gift basket and a letter of appreciation. Leonard Davis, you’re a badass. And now, just because I feel like it, here’s a picture of LaVar Arrington ending Troy Aikman’s career.