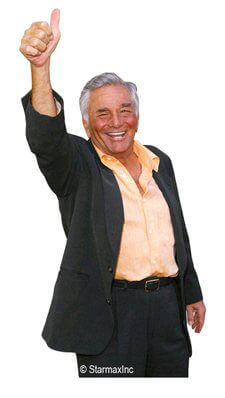 Many people will remember Peter Falk best as the detective on the hit television series Columbo, but PETA will remember him fondly as a real-life hero for animals. He was one our first celebrity supporters and helped us defeat Bobby Berosini, the Las Vegas animal trainer who was caught beating the orangutans he used in his nightclub act, more than two decades ago.

Peter took his concern for animals with him to the workplace, too, permitting only cruelty-free cosmetics on the set of Columbo. He signed PETA’s “Get Gillette Off the Set” petition, demanding the removal of Gillette products from all studio sets, offices, and facilities.

On PETA’s behalf, Peter wrote to the Fraternal Order of Police to ask police and sheriff’s departments not to use elephants in fundraisers, saying, “You do not have to be a detective to know that, after years of confinement, chains, and beatings with bullhooks, these animals are going to rebel.”

He also penned a letter to law-enforcement officials, reminding them that people who abuse and kill animals rarely stop there; cruelty to animals is often a precursor to other violent crimes.

Peter did his best to help “solve” cruelty to animals, and he will be sorely missed by his friends at PETA.