PETA Asia staffer Ashley Fruno—who has been in Japan working with Isabella Gallaon-Aoki from the local group Animal Friends Niigata since last Saturday—has witnessed tremendous devastation and heartbreak since arriving in the region. But she has also seen people courageously putting their own lives at risk in order to safeguard their animal companions, and aid workers going above and beyond their mission to recover human bodies by saving animals who have miraculously survived the earthquake and tsunami. This is Ashley’s most recent update from the hardest hit areas of Japan:

Isabella received a call from a local veterinarian who said that he had some leads on where animals in need of rescue might be. He was willing to help out in any way that he could, but he was unable to leave his house because of the gas shortage.

We went to some of the devastated areas and saw our first sign of life in the debris—a feral cat hiding among the rubble. We were unable to catch her but left her food. We checked on many houses with doghouses outside, but there were no dogs to be found. We also checked out two pet stores, one of which had no animals in sight and the other, a store that sold only birds, was almost reduced to a pile of rubble. We searched through the cages and debris, but were unable to find any live birds. Most of the cages were smashed, so the birds who were able to escape probably flew away, and those who were trapped likely drowned. We found the bodies of five birds in one cage alone. 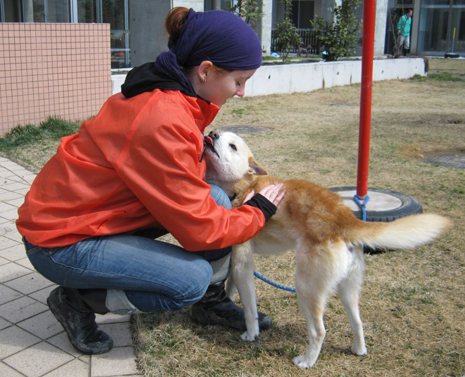 We visited Sendai’s city animal shelter and offered assistance. It has had an influx of animals as well as many reports of missing animals. Fortunately, it is not full yet and will continue to take in lost and abandoned animals. The animal shelter has adequate supplies now but will contact us if more are needed. It will also likely need the help of Isabella’s shelter to take in animals when it eventually fills to capacity. Shelter workers said that the phone line was just restored, so they know that the onslaught is coming as many people with animals have been unable to call.

Shelter officials mentioned that a soldier found a cat when he was recovering human bodies. The cat was terrified and hiding in a cat bed. The soldier brought him to the animal shelter, bed and all, and the cat will be put up for adoption if his guardians don’t claim him.

We spent the rest of the day at evacuation centers handing out pet food and asking for leads on animals who had been abandoned. One evacuation center was housing 10 dogs, and some of the evacuees reportedly had cats at home they were checking on, so we left a huge supply of food. 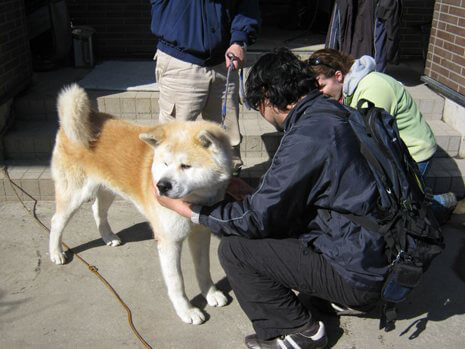 One of the center coordinators told us a touching story about his Akita named Shane. When the man heard the tsunami warning, he rushed to warn his neighbors after letting Shane free in the yard. He tried to get back to his house to get Shane, but the tsunami was rapidly approaching, and he was forced to go to the school on higher ground. He said he had given up hope of seeing Shane alive again. But six hours later, one of the people staying in the center said that they saw a dog outside. The man went to look, and it was Shane! The dog had never been to the school before, but somehow, his instincts lead him there. Shane had managed to swim through chest-high water to be reunited with his guardian. The man took us to Shane, who was staying at his house, which is now dry. Shane must have clung to debris, as he had cuts on both his elbows. We instructed the guardian on how to clean Shane’s wounds and gave him some ointment. We left fuel with the veterinarian, and he will return to check on Shane and provide him with antibiotics.

The veterinarian will serve as the “mobile vet” for Sendai. Isabella is going to keep him supplied with food, and the World Veterinary Association representative we have been working with will give him medication and other supplies. He plans to visit all the local evacuation centers distributing food and administering veterinary care to animals in need.

Recovery from this disaster is going to take months, if not years. People in the hardest hit areas will continue to need pet food and veterinary supplies for weeks to come, as will the animal shelters, which will also need to house animals until their homeless guardians are able to find somewhere to live. You can help by donating to PETA U.S.’ Animal Emergency Fund, which provides grants to PETA Asia and other organizations doing rescue work.