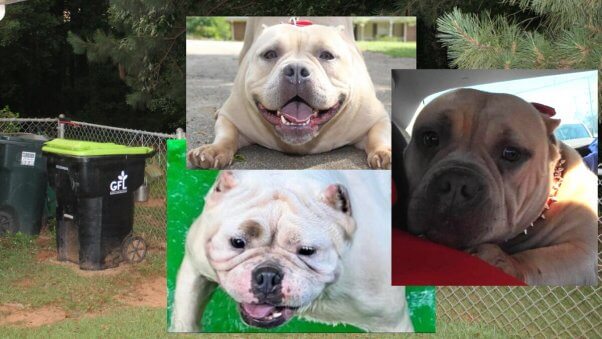 PETA has reviewed nearly 100 pages of investigative records and more than four hours of body-camera and interview footage regarding the case of Eric Tolbert, a sheriff’s deputy in Rockdale County, Georgia. According to records, Tolbert’s three American bullies—Luke Cage, Storm, and LaLa—died of heatstroke over the course of two days in June, when temperatures reached a high of 95 with a heat index of more than 100 degrees. Tolbert was so unfazed by his dogs’ deaths that he, as he told one of the sheriff’s office investigators, “trashed ’em.” Indeed, decomposing remains were found in trash bins on Tolbert’s property.

At the time of their deaths, Tolbert was a K-9 handler for the sheriff’s office. Investigators also found his assigned K-9 partner, a black Labrador retriever named Aegis, along with another dog who appears to be a pit bull owned by Tolbert, kept in squalid, feces-littered pens with dirty water buckets. While Aegis was removed by county officials, the other dog was not. His condition and whereabouts are currently unknown.

The Honorable Alisha Johnson
District Attorney
Rockdale County District Attorney’s Office
770-278-7990
[email protected]
Below is sample language, or you can use your own words. Please be polite and respectful.

I was appalled to learn that Rockdale County Sheriff’s Deputy Eric Tolbert has not yet been charged with cruelty to animals in connection to the horrific heat-related deaths of three dogs—Luke Cage, Storm, and LaLa—who were kept caged in a squalid shed in his backyard and the conditions for two surviving dogs who were found in filthy pens littered with moldy feces and without access to clean water. I urge you to take immediate action to ensure that the laws protecting animals in Georgia are upheld by filing felony cruelty-to-animals charges in this disturbing case as soon as possible.

Thank you for taking action to ensure justice for all the dogs in this heartbreaking case and helping to prevent others from being abused.