PETA sent a letter this morning thanking Secretary of State Rex Tillerson for calling on North Korea to abandon its nuclear and ballistic missile programs—which could, as PETA notes, not only wipe out the world’s human population in a nuclear war but also decimate all animal species.

To support Tillerson’s efforts, PETA has placed a cheeky new banner outside its 16th Street office in Washington, featuring an image of the North Korean dictator and proclaiming, “Don’t Go Ballistic: Go Vegan, and Make Love, Not War.” 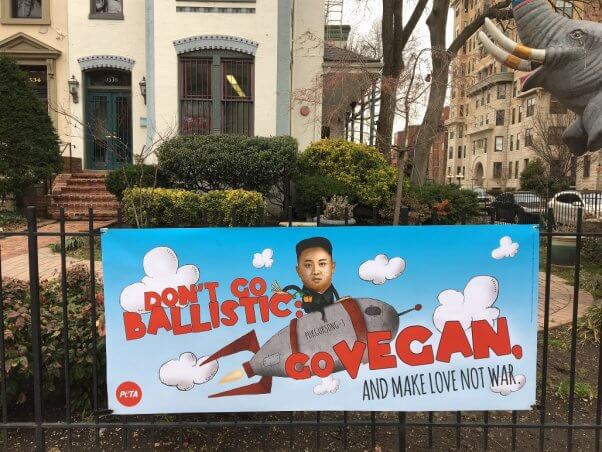 “War causes all species to suffer, and an all-out nuclear conflict could mean the untold suffering and death of all living beings on the planet,” says PETA President Ingrid Newkirk. “Mahatma Gandhi demonstrated that it’s easier to work for peaceful solutions when nonviolence is part of your everyday life, whether you’re a world leader or an average citizen.”

Eating vegan meals has been shown to help curb aggression: At Alabama’s highest-security prison, officials found that serving inmates meat-free meals as part of a violence-reduction program resulted in a significant decrease in behavioral problems.

Consuming meat, eggs, and milk automatically supports some of the worst violence on Earth: Piglets’ tails and testicles are cut off without painkillers, chickens’ and turkeys’ throats are slit while they’re still conscious, and cows are repeatedly impregnated and separated from their babies so that they’ll continue to produce milk for human consumption.