Update: The Petland store has closed, and the employee has been charged with cruelty to animals. Click here for details. 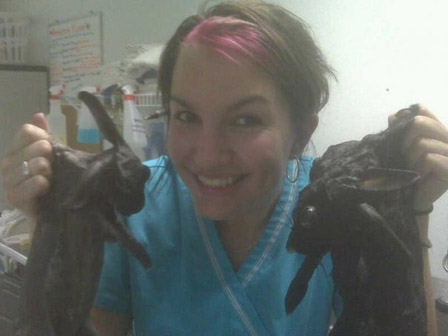 This photo was taken in the back room of a Petland store in Akron, Ohio, and posted on Facebook by Elizabeth Carlisle, who can be seen grinning as she holds two dead, soaking-wet rabbits by the scruff of the neck—rabbits she just drowned while on Petland’s time clock. On Carlisle’s Facebook page, she confirmed a friend’s guess that she had drowned these two rabbits and wrote, “[T]he manager took the pic for me. [S]he reminded me that there were people outside as [I] was swearing at them to just hurry up and die but then she was so kind as to take this picture.”

These horrific deaths followed what was apparently an equally horrifying life for these rabbits. Other comments Carlisle posted made it clear that the rabbits were drowned after sustaining agonizing injuries when they were allowed to “attack and eat each other.” The rabbits suffered from “deep wounds all over,” “an eye missing,” what Petland staff “suspected was a broken jaw,” and paralysis from the waist down—injuries that would not have occurred had these animals been provided with proper care and supervision.

Undercover investigations have revealed time and time again that companies that breed and sell animals are concerned about profits, not animals’ well-being. We are urging Petland to think long and hard about what this incident makes clear: The company has no business selling any animals.

To prevent future incidents like this one, please, never buy from pet stores and urge Petland at the very least to stop selling rabbits.