So, you just found out that your love is a cow molester who kills babies after raping their mothers? You’re in a super-sucky relationship, and you need to get out now.

Realizing that your recent ex is a mass murderer can be hard—but most of us have been there. Rest assured that you were right to end your toxic affair, because not only is the dairy industry a sexist pervert, the consumption of dairy is also linked to the risk of suffering from heart disease, cancer, and strokes. You weren’t safe in that relationship. It wanted you to think it cared and not realize that it’s the number one source of allergies and that it’s linked to constipation, obesity, and acne. But now you know, and you deserve much better—and so do cows.

You might feel like you’ll never be able to replace what once had you under its spell, but no breakup is as scary as dairy. You’ll move on to build a superior relationship with nut, rice, oat, or soy milk before the cereal gets soggy—and you’ll quickly see that there was nothing to be afraid of. Your knight in shining almond is here, in the form of dairy-free cheese, ice cream, butter, and yogurt that’ll treat you, animals, and the planet right. Finally, a partner your parents Mother Nature will approve of.

Cancel your fling with dairy so that mother cows don’t have to part with their babies permanently. The male calves born into the dairy industry are taken from their mothers shortly after they’re born and killed for veal. The female babies are often forced to follow in their mothers’ sad footsteps—being raped, mourning their kidnapped babies, enduring harassment, and sent to slaughter.

Here are some links to help you shove every artery-clogging, saturated fat– and cholesterol-filled, bacteria-laden dairy-based food you own into a box to the left:

Fear not, my dairy-free darling: PETA is here to support you in this transitional phase. Anytime you feel like you might want to hit dairy up—just to meet for a coffee—don’t. It’s a slippery slope.

Dairy Who? Don’t Let This Breakup Hold You Back

Remember when you had a thing with dairy? Hahaha—so embarrassing. Replacing deadbeat dairy is easy—order your veggie or Sofritas burrito with guac and pico de gallo instead of cheese and sour cream, and make your iced mocha latte suitable for humans by asking for soy, almond, oat, or coconut milk.

This is good—this is healthy. We’re vibing here. Dive into the world of vegan queso, sour cream, ranch dressing, cream cheese, and all the other dairy-free versions of your favorite foods your heart desires.

PETA Does Your Homework for You! 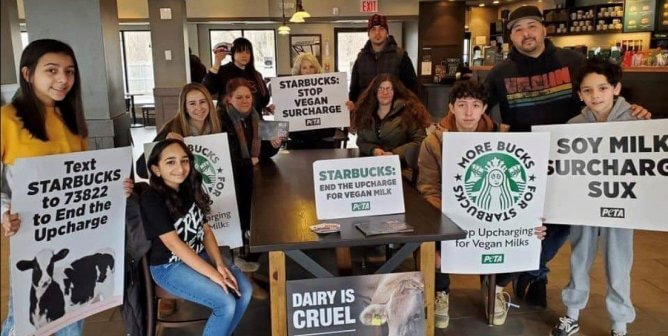