Los Angeles – Actor Danny Trejo often plays the bad guy—but in a new PETA Latino campaign, the star of the upcoming film 1521 is rushing to the rescue of dogs everywhere by urging fans never to leave animals in hot cars. Going up Monday just feet away from the entrepreneur’s local shop, Trejo’s Coffee & Donuts, the sky-high plea will feature Trejo with his dogs—The Duke, Sgt. Pepper, John Wesley Hardin, and Penny Lane—in his prized Buick Riviera. 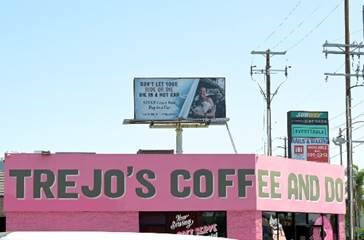 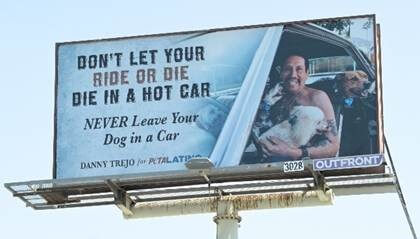 “Heatstroke sets in so fast for dogs in hot cars that even a quick donut run could end in tragedy,” says Trejo. “Please, never take chances with your dog, your ride or die. They’re counting on us to protect them.”

Temperatures inside a parked car can reach the triple digits in just minutes—especially in a warm climate like Los Angeles’—even in the shade with a window partially rolled down. And because dogs can sweat only through their footpads and cool themselves by panting, they’re at greater risk of suffering from heatstroke than humans are. Already this year, 45 dogs have died from heat-related causes and another 221 animals were reportedly rescued from potentially deadly situations. Since these numbers include only incidents reported in the media, the actual figures are surely far higher.

Anyone who sees a dog in a parked car should take immediate action: Write down the vehicle’s color, make, model, and license plate number and rush to have the nearest business page the car’s owner. If that person can’t be found, call 911—and if authorities are unresponsive, do what it takes to save a life. PETA offers an emergency window-breaking hammer for intervening in life-or-death situations.

PETA Latino—whose motto reads, in part, that “animals are not ours to abuse in any way”—opposes speciesism, a human-supremacist worldview. For more information, please visit PETALatino.com or follow the group on Twitter, Facebook, or Instagram.