These Beauty Brands Are Still Tested on Animals

You may have assumed that most major cosmetics companies were on board with alternatives to cruelty to animals, but there are some that still pay to poison and kill. It isn’t always easy to know which brands don’t test on animals. For instance, L’Oréal, which doesn’t test on animals in the United States, pays for deadly testing in China, where archaic and painful experiments on animals are required for cosmetics. 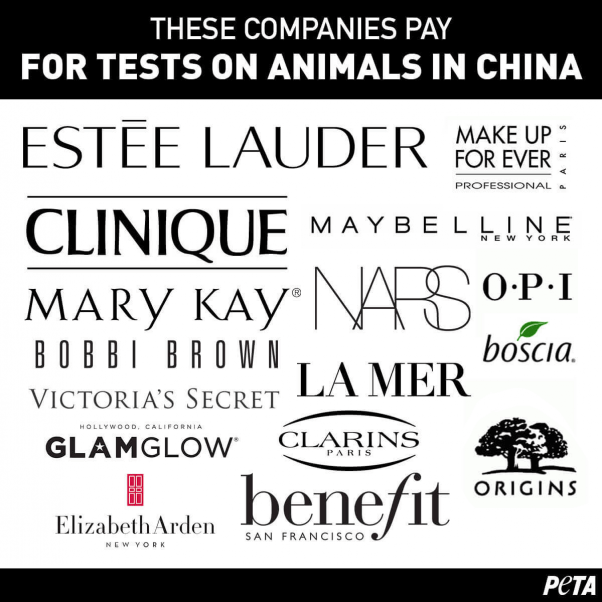 Here are some of the top cosmetics brands whose products are still tested on animals—and some brands that don’t test on animals that you should support instead:

Benefit may use innocent imagery in its marketing, but behind the scenes, animals are used in cruel tests for its products. Instead of using Benefit’s blush, try Too Faced Blush.

✔ Your Pick: Too Faced Cosmetics

Animals don’t worry about wrinkles, and we shouldn’t poison and kill them for our night cream as Clinique does. Instead of using Clinique’s eye cream, switch to Tarte Cosmetics Maracuja C-Brighter Eye Treatment.

Estée Lauder is the parent company of many subsidiaries, some of which still test products on animals, including its namesake brand as well as Clinique, Bobbi Brown, La Mer, and Origins, among others. Instead of using any of these cruel brands’ concealers, try the NYX Cosmetics HD Photogenic Concealer Wand.

You can have bright and long-lasting looks by choosing theatrical-quality makeup from brands that don’t test on animals, rather than Makeup Forever’s products that are tested on animals. Instead of using Makeup Forever’s eye shadow, try ColourPop Super Shock Shadow.

We definitely think that you were “born with it” and don’t need Maybelline’s cruelly produced items to feel pretty. Instead of using Maybelline mascara, try wet n wild Mascara.

OPI is owned by Coty, Inc., and was removed from our Beauty Without Bunnies list when we discovered that it had abandoned its policy against tests on animals and was selling in China. If you were using its polish, help spare rabbits by trying Pacifica 7 Free Nail Polish instead.

After years of upholding its policy never to test on animals, the company has let down compassionate consumers everywhere by choosing profits over principles. Victoria’s Secret expanded sales to China and began paying for cruel and deadly tests on animals in order to sell its products there.

✔ Try any of the perfumes on this list instead of Victoria’s Secret perfume.

A post shared by *Not Coaching @ the Moment* (@coachstacia)