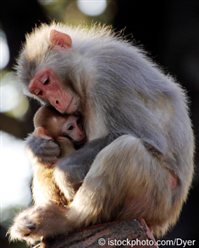 Bioculture, the company that planned to open a monkey-breeding facility in Guayama, Puerto Rico, suffered another crippling blow today when Puerto Rico’s Court of Appeals upheld a December 2009 Superior Court ruling that the construction of the facility was illegal because of zoning and permit issues.

You may recall that PETA and local citizens first got construction of the facility stopped in 2009 with a successful lawsuit and injunction blocking further construction. Unhappy that we interrupted its plans to imprison monkeys and sell them off to cruel fates in laboratories, Bioculture appealed the decision. And now, once again, the Puerto Rican courts have told the company, “No más.”

Since the city of Guayama has also enacted a law banning the import, export, breeding, and use of monkeys in experiments within its boundaries, Bioculture’s shameful activities thankfully have no home in Puerto Rico.