If you’ve seen or shared a recent viral video of a polar bear “petting” a dog, you may want to take that “like” back—because a dog at the same location was killed and eaten by a bear.

In the video, a dog can be seen chained to the ground at the Mile 5 Dog Sanctuary in Churchill, Manitoba. Chained outside in polar-bear country, these dogs are completely vulnerable to predators and unable to escape danger.

Just days after the video was released online, a Manitoba Sustainable Development (MSD) spokesperson told CBC News that numerous bears, including a mother and her three cubs, had to be removed from the area after a bear killed one of the dogs.

The property owner—who forces the dogs to pull sleds—said that there were nine bears on his land around the time that the dog was mauled and eaten. But this wasn’t an accident. The owner actually feeds the bears, which attracts them to his facility. He noted that the dog was devoured on a night when he didn’t leave any food out.

Feeding polar bears is considered illegal in many cases and could violate Manitoba’s Endangered Species and Ecosystem Act. The MSD spokesperson said in a statement that “failure to cease the action of feeding/baiting polar bears will result in further enforcement action.” 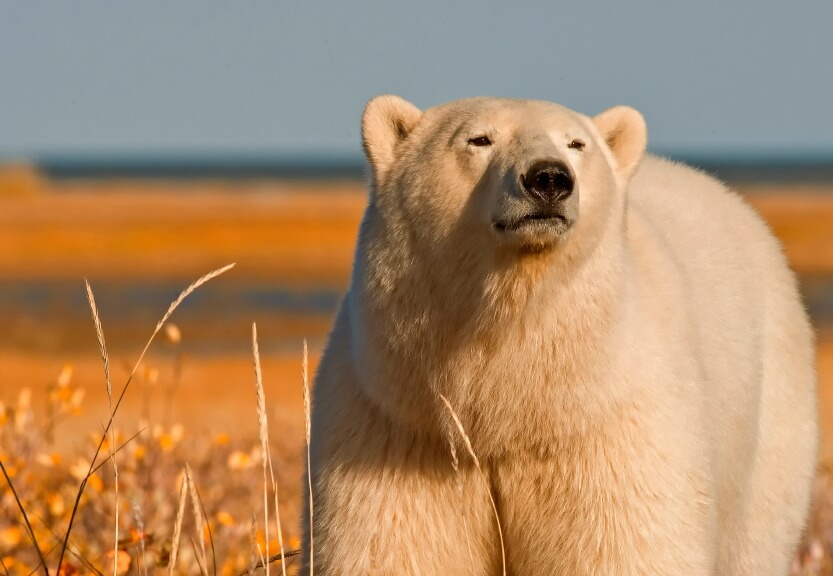 By giving polar bears access to free, easy meals, Mile 5 Dog Sanctuary was encouraging them to associate humans and dogs with food. Feeding and interacting with wildlife puts everyone’s life in danger because it encourages wild animals to wander into populated communities, increasing the likelihood that they will attack or be killed by humans who see them as “pests.”

For years, the conditions at Mile 5 Dog Sanctuary have caused outrage among local residents and tourists alike. In the owner’s own words, he’s been “charged with everything … under the book” when it comes to the welfare of the dogs on his land. He keeps dozens of them chained outdoors without shelter in extremely cold, windy conditions. Periodic maulings by polar bears—and reportedly wolves as well—only add to the dogs’ misery.

Dog-sledding operations commonly chain dogs outside when they aren’t working, where they’re exposed to subzero temperatures and denied proper care. This is cruel enough, but leaving dogs defenseless against hungry bears looking for an easy meal is unspeakably appalling.

Speak Out for These Dogs!