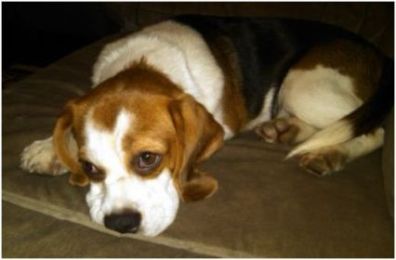 Hugs was one of the roughly 250 animals who were
surrendered by PLRS.

Even though The Hasselhoffs was canceled after just two episodes, 2010 still turned out to be a pretty great year. Thirty-three Chilean miners were rescued after being trapped underground for more than two months, and dog guardians were introduced to the amazing stuffing-free Crazy Critters™ dog toys. While impressive, I am not sure they quite measure up to 2009’s Shake Weight®.

2010 was also an outstanding year for PETA. In addition to celebrating 30 years of fighting to end the suffering of animals, PETA scored a number of remarkable victories. Here are a few of them:

1.      Professional Laboratory and Research Services (PLRS): PLRS surrendered nearly 200 dogs and more than 50 cats and shut its doors just one week after PETA released the results of its shocking undercover investigation of the laboratory and filed a complaint with the U.S. Department of Agriculture.

2.      Nike: After PETA sent Nike undercover footage detailing the gruesome suffering that the exotic-skins industry inflicts on animals, the world’s leading shoe manufacturer and its upscale affiliate Cole Haan stopped selling the skins of alligators, snakes, and other animals.

3.      NASA: And who can forget the early holiday gift that PETA and our supporters received when NASA called off plans to conduct cruel radiation experiments on monkeys earlier this month?

4.      Utah Pound Seizure: Prompted by PETA’s shocking undercover investigation inside laboratories at the University of Utah, the state amended its archaic “pound seizure” law so that government-run animal shelters would no longer be forced to sell dogs and cats to laboratories for use in cruel and deadly experiments. PETA’s investigation and the new law also prompted the shelter that had been selling the most animals to the university to end the shameful practice.

5.      U.S. Global Exotics (USGE): After reviewing evidence gathered during PETA’s seven-month undercover investigation of this PETCO and PetSmart supplier, Arlington (Texas) Municipal Judge Michael Smith awarded custody of the 26,000 animals rescued from the warehouse to the city of Arlington. USGE closed, the company’s empty facility went up for sale, and a federal arrest warrant was issued for USGE owner Jasen Shaw, who is under investigation for smuggling, conspiracy, and aiding and abetting and is believed to be hiding in New Zealand.

7.      Lufthansa: Less than a day after PETA released photos of more than 50 beagles who were transported on a Lufthansa cargo plane from the U.S. to an animal testing facility in Scotland, Lufthansa announced a new policy prohibiting the transport of dogs and cats to laboratories.

While this year was marked by some great achievements, we still need your help to make 2011 an even better year for animals. Will you support our lifesaving efforts to stop animal suffering and abuse in the new year and beyond?